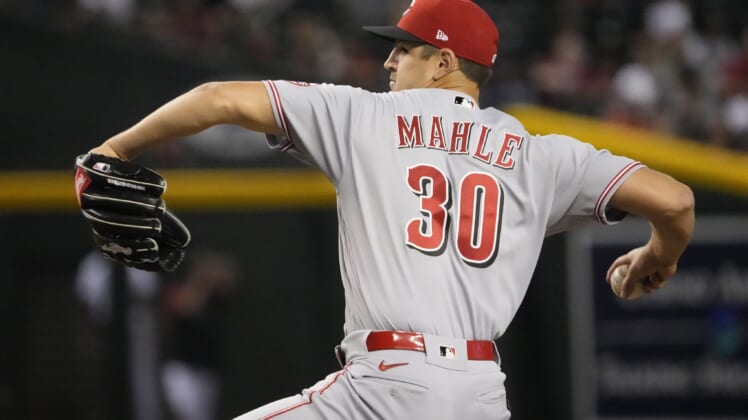 Cincinnati Reds ace Luis Castillo is generating the most buzz in MLB trade rumors, but starting pitcher Tyler Mahle could be one of the unheralded gems available before the Aug. 2 deadline.

Mahle isn’t for every contender. As an unvaccinated player, the Toronto Blue Jays can’t acquire him and there are some risks for American League contenders, especially in the AL East. While it’s a factor working against him, it certainly won’t erase the possibility of him landing in the AL.

Similar to Castillo and Frankie Montas, Mahle is under contractual control through the 2023 season. it significantly boosts his trade value. A young starter with multiple seasons of team control and the upside to become an even better starter than he is now, he should be a coveted arm.

The San Francisco Giants would certainly love to acquire a front-line starter at the MLB trade deadline. With executive Farhan Zaidi needing to address multiple positions, it seems unlikely he can’t put the offer necessary to land a Castillo or Montas.

Mahle might be a great cost-effective alternative. He can slot in as the No. 3 starter behind Logan Webb and Carlos Rodón, providing San Francisco’s pitching staff with greater depth. In pushing Alex Cobb and Alex Wood down a spot, Mahle also serves as insurance for veterans who might need their innings monitored down the stretch.

There is a lot to suggest Mahle is better than his baseline numbers. The 27-year-old’s 4.48 ERA suggests he is a back-end starter with control issues (3.51 BB/9). However, he compiled a 3.50 ERA with a 10.36 K/9 and 2.63 BB/9 across 10 starts from May 8 – June 26. History also proves he is a much better pitcher on the road when he’s away from the hitter-friendly Great American Ballpark. The Giants love Reds’ pitchers and Mahle could be their next find.

It feels like it’s been years since the Cleveland Guardians needed pitching. For a cash-strapped ballclub, it’s even more challenging to pursue the top pitchers available. So, that forces the front office to find alternatives on the trade market.

There are two primary reasons why Mahle should appeal to Cleveland. First, he’s owed less than half of his remaining $5 million salary this season and he likely won’t eclipse $10 million in arbitration this winter. Another plus, the Guardians’ farm system is overcrowded with infielders and it creates a clear opportunity for these two clubs to align on a deal.

Mahle could also reach his ceiling in Cleveland. The 6-foot-3 righty’s stuff isn’t a question. He boasts a four-seam fastball that generates a 13.6% Swinging Strike rate and holds opponents to a .200 batting average. The splitter is also a ‘plus’ pitch (12% SwStr), while his slider needs some refinement. With the help of the Guardians’ pitching coaches and in a better environment for pitchers, Mahle could thrive.

The Atlanta Braves won’t be in the market for a starter they can plug atop their playoff rotation. Max Fried and Charlie Morton have those roles locked down. Instead, with Mike Soroka still sidelined and Spencer Strider on an innings limit, the Braves could simply want Mahle to eat innings.

Look at Atlanta’s track record with young arms. The organization knows how to get the best out of many of its top arms. There wouldn’t be an expectation for Mahle to be an ace, but he could be the best No. 5 starter in MLB with the Braves.

As mentioned above, Mahle can start in Atlanta for multiple years. Morton likely departs in free agency next year and that creates an opening for another young starter. This would would certainly fly under the radar at the deadline, but it might help the Braves win the NL East.