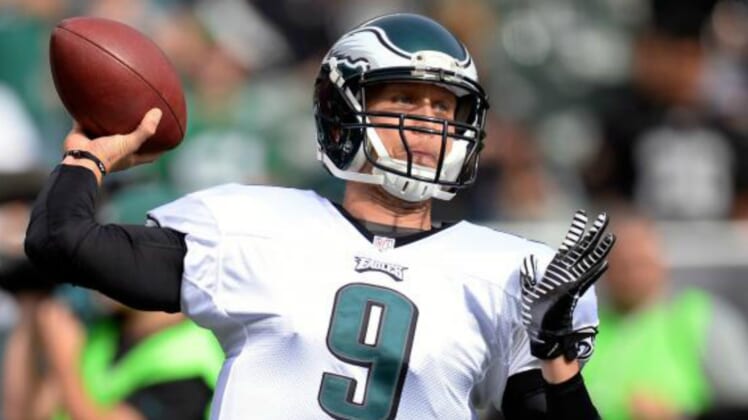 It really seems like we’ve seen this movie before. The Philadelphia Eagles lost Carson Wentz to injury, and it looked like their season was in the toilet at 6-7. Two games later, and playoff dreams are still very much alive, thanks to the play of backup Nick Foles.

After Foles had a strong, yet flawed game in Week 15 against the Los Angeles Rams, he came out on fire Sunday as the Eagles beat the Houston Texans.

Yes, the same Houston Texans who’ve been mowing down the competition ever since Week 4.

Foles, who’s one of the most cool-under-pressure guys in the league these day, delivered strike after strike in Sunday’s game, leading Philly to an incredible 32-30 win over this Houston squad to improve to 8-7.

He finished with 471 yards on 35-of-49 passing with four touchdowns, including an absolute dime to Nelson Agholor that went 83 yards (watch here). Along the way, he broke the Eagles’ franchise record for most passing yards in a game.

He even got taken out by Jadeveon Clowney (who got away with a vicious facemask earlier in the game) with under two minutes left, only to come back and lead the game-winning drive.

Simply put, Foles is a late-season god in Philadelphia.

As fans across the nation watched in awe, everyone got the sense that we’re witnessing the same magic that led to Philly winning Super Bowl LII last year.

We tried to warn the rest of the NFL about Nick Foles. #FlyEaglesFly pic.twitter.com/0e9p6BTqqu

Nick Foles and the Eagles are going to win the Super Bowl again.

Nothing forced by Foles. All weapons being used. Balance. Just enjoy the moment. #FlyEaglesFly

The Eagles, as I said on Undisputed, are going to beat the Texans. With Nick Foles at QB, they're suddenly the NFLs most dangerous team.

The Nick Foles “thing” is one of the most inexplicable plot twists in NFL history.

The Eagles can’t keep Foles and Wentz. Those knuckleheads can’t seem to comprehend it. One guy is a Super Bowl mvp who wins every single game he plays. One guy has never won a playoff game and has a major knee injury. Who would you take?

Nick Foles is a playoff zombie.