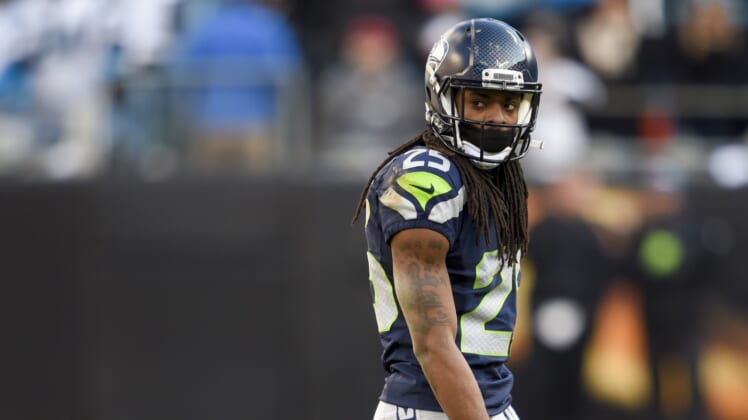 Seattle Seahawks defensive back Richard Sherman did something not often seen in the NFL. He committed three penalties on one play.

The pass interference negated a Kam Chancellor interception. The holding came during the return, which was declined.

Afterwards, Sherman took his helmet off to draw the unsportsmanlike conduct penalty. Needless to say, he was not pleased.

Sherman continued his argument. In reality, he could have been flagged for a second unsporstmanlike conduct, which would have led to his ejection.

As is typical with anything having to do with Sherman, he drew plenty of reactions from both sides.

Maybe, for all the wrong reasons after what he pulled on the field today. pic.twitter.com/fyN9LRyCjs

An MLB ump or NBA ref would never tolerate what Richard Sherman just did. That'd be an easy ejection in either of those sports.

I GET IT, SHERMAN!! But please be careful! Focus that anger into the game. We need you! @RSherman_25 #GoHawks #SEAvsTEN pic.twitter.com/o4wqeNl6ga

Richard Sherman got 3 penalties called on him in one play. #seahawks pic.twitter.com/SYbEkxIwDD

Richard Sherman lucky not to be tossed there. #NFL

At what point do you eject Richard Sherman for acting a fool and berating an official?? Asking for a friend

We actually have to give the referees some credit for their restraint. The fact of the matter is that Sherman is a star. People come to the game to see him play. That doesn’t mean that he shouldn’t be ejected if his actions warrant it, but it shouldn’t be done lightly.

This play will certainly not be a part of Sherman’s Hall of Fame highlight reel.