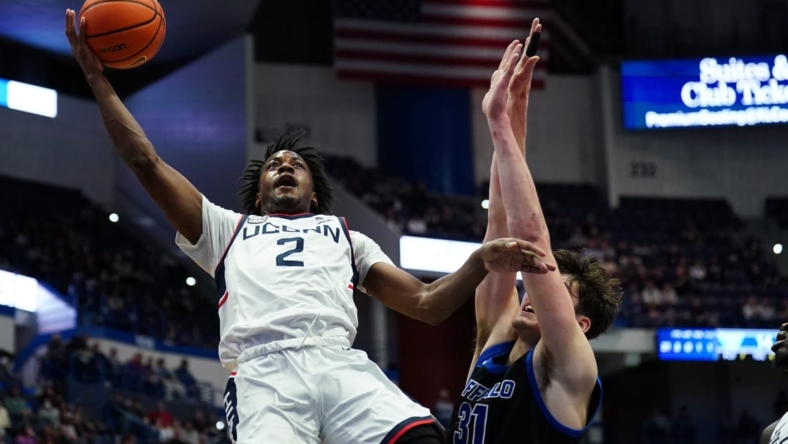 Tristen Newton totaled 22 points, 11 assists and 10 rebounds as No. 25 UConn started slowly but gradually pulled away for an 84-64 victory over Buffalo on Tuesday night in Hartford, Conn.

Newton recorded the 12th triple-double in school history. It was the first triple-double since Daniel Hamilton totaled 11 points, 11 rebounds and 11 assists against Central Connecticut State on Dec. 23, 2015.

He reached the triple-double with the game already decided by emphatically snatching a missed 3-point attempt by Buffalo’s Kidtrell Blocker with 86 seconds left, earning him hugs from his teammates and an ovation from the crowd.

A transfer from East Carolina, Newton made 4 of 14 field-goal attempts but hit 14 of 17 free throws to go along with four steals in 36 minutes.

Joey Calcaterra added 15 points for the Huskies, who shot 54.2 percent after halftime, 44.4 percent overall and led by double digits for the final 22:44. Nahiem Alleyne added 12 while Adama Sanogo and Donovan Clingan contributed 11 apiece to help the Huskies compensate for the absences of Andre Jackson Jr. (broken pinky) and Jordan Hawkins (concussion protocol).

Armoni Foster and Blocker scored 11 points apiece for Buffalo, which shot 43.1 percent and allowed 21 points off 18 turnovers. Leading scorer Yazid Powell was held to two points on 1-of-10 shooting from the field as Buffalo (1-2) dropped to 1-9 all-time against the Huskies.

The Huskies missed 11 consecutive shots before Alleyne’s jumper put them up 13-12 with 9:14 remaining in the opening half. UConn began pulling away when Newton’s dunk off a Buffalo turnover made it 33-22 with 3:06 remaining before the Huskies held a 44-28 lead by halftime.

The Huskies took their first 20-point lead when Alex Karaban hit a 3-pointer to make it 56-36 with 14:29 remaining. UConn essentially clinched the win when Newton lobbed an alley-oop pass to Clingan for a dunk to make it 76-57 with 2:51 left.