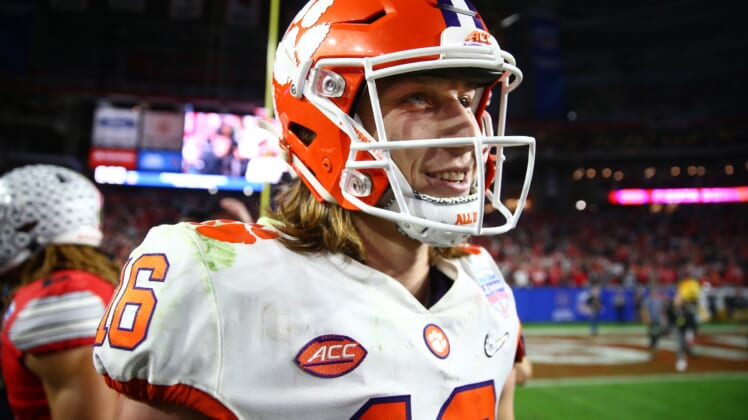 During Saturday’s Fiesta Bowl against Ohio State, Clemson quarterback Trevor Lawrence was plastered on a targeting hit from Buckeyes defensive back Shaun Wade.

Wade was ejected from the game for the egregious helmet-to-helmet hit, and at the time, it seemed like Lawrence might have been injured on the play.

On Monday, Lawrence opened up about the hit from his perspective and noted it absolutely was the moment that sparked what was ultimately a huge comeback win for the Tigers.

“It was just, they hit me, and I was worried it was my collarbone for a second because I couldn’t feel it up there around my shoulder and neck, and my arm just went numb,” Lawrence said Monday on a CFP teleconference, per ESPN’s Heather Dinich. “It was just a really bad stinger. And then I got kind of — I was kind of pissed off because I knew they were over there thinking like, ‘All right, we knocked him out.'”

One play later, though, and Lawrence was back in the game with a humongous chip on his shoulder.

“They think they had all the momentum, so I was like, ‘All right, I’m just going to pop up, I’m going to run it off,'” he said. “And I was pissed, too, because I thought we were punting, and then it turns out they called targeting and we got a chance to go back out there and we finished and scored on that drive. But I was just like, man, from then on, they thought they had knocked me out. I had a different kind of edge when I got up.”

Lawrence ended up having a strong game. He ripped off a magnificent touchdown run, breaking ankles in the process, and threw a couple of touchdowns to star Travis Etienne as Clemson won 29-23.