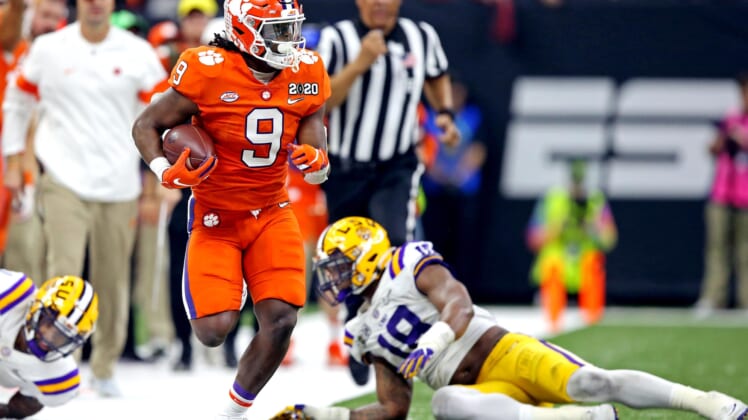 Clemson Tigers star running back Travis Etienne shocked the world on Friday, announcing that he will return to Clemson for his senior season.

Etienne, who broke multiple school records in his first three seasons at Clemson, announced on Twitter that he looks forward to returning to the Tigers for his final season.

The 20-year-old running back emerged as an unstoppable force in the Tigers’ offense the past two seasons. Trips to the end zone almost became expected on every carry. Etienne broke Clemson’s career record for rushing touchdowns on an incredible, 86-yard touchdown run.

The junior finished the year with his second consecutive 1,600-yard with 20-plus total touchdowns. Etienne showed tremendous growth as a receiving back this season, hauling in 37 receptions for 432 yards and four touchdowns. He also finished second in the FBS in yards per carry (7.8).

Clemson already entered the offseason as favorites to win the national championship without Etienne. Now the star backfield of Etienne and quarterback Trevor Lawrence can dominate one more time with their focus set on grabbing another title.

The decision could pay off nicely for Etienne. The 2020 draft class is loaded at running back with Georgia Bulldogs star D’Andre Swift, Wisconsin Badgers running back Jonathan Taylor and Ohio State’s J.K. Dobbins headlining the group.

Etienne has a chance to be the top running back prospect in the 2021 draft class if he delivers another dominant season. He’ll also get to keep adding to his program records in the process.