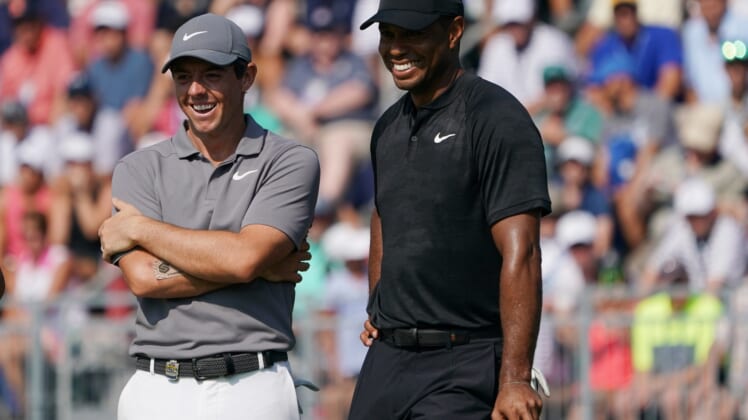 The Tour Championship brings us the official end of the PGA Tour season. Whether it relates to the Tour Championship, the FedEx Cup, next week’s Ryder Cup, or next season, we have plenty of fun storylines to follow this week at East Lake.

A win at the Tour Championship would mean a FedEx Cup title for Bryson DeChambeau, Justin Rose, Tony Finau, Dustin Johnson and Justin Thomas. While it’s possible, Phil Mickelson, Patrick Reed, Francesco Molinari, Brooks Koepka, Rory McIlroy and Tiger Woods aren’t likely to win the FedEx Cup. Still, a win, or at least a good performance at the Tour Championship, would have potentially large significance going forward. These names, and others, give us plenty of great storylines to watch at East Lake and the Tour Championship.

Can Bryson DeChambeau seal the most dominant FedEx Cup ever?

A win at East Lake would not only secure a FedEx Cup for DeChambeau, but it would put him in decorated company. DeChambeau is already one of only eight men to win multiple postseason events in the same year (though Rory McIlroy did it twice). No player has won three in the same year. In fact, only McIlroy, DJ, and Tiger have won three postseason events in their careers. That would be quite an achievement for a guy who just turned 25.

While Rose has accomplished a lot in his career, the Tour Championship will mark a first. It will be the first time that Rose has ever played a tournament as the No. 1 ranked player in the world. He earned the top spot in the world at the BMW Championship. Rose has been a model of consistency for more than a year. Since missing the cut at the 2017 PGA Championship, he’s won four times and failed to reach the weekend only once. In fact, Rose has at least one win every year since 2010. His stay atop the rankings may not be long (more on that later), but Rose absolutely deserves to play a tournament as No. 1.

Which Rory McIlroy will show up?

It’s been a weird year for McIlroy. With a win, three second-place finishes, and five other top-10s, it hasn’t been a bad year. But it still doesn’t feel as though his game has completely clicked, either. If the inconsistency continues, it will bode very well for the American Ryder Cup team. But McIlroy has three top-10s (and another T-12) in his last five events. He’s a longshot for the FedEx Cup. But imagine adding a win to that recent run as we head France and the Ryder Cup. If that happens, it will be very good news for a European team looking to win its sixth straight Ryder Cup on European soil.

Keegan Bradley vies to put another mark on revival season

Bradley will win the FedEx Cup if he wins at East Lake and DeChambeau does anything other than a solo second. But the significance of this week goes beyond just the FedEx Cup. Bradley was once one of the game’s most promising young players, but has gone through a period of extended struggles. He’d enjoyed a nice 2018, though. Bradley posted three top-10 finishes before the BMW Championship, where returned to the winner’s circle. Bradley won’t be a part of the American Ryder Cup team. But if he can have a strong week at East Lake, he’ll be a big name to watch in 2019.

Since missing the cut at THE PLAYERS Championship, Molinari has enjoyed one of the most sustained runs of consistency in recent memory. He has three wins (including the British Open), two second-place finishes, and two, other top-10s. Koepka, meanwhile, has wins at the U.S. Open and PGA Championship (not to mention the 2017 U.S. Open) to his credit. A FedEx Cup would wrap up one of the better runs in history for either man. Both need help from others to win the FedEx Cup. But a win at East Lake — even if it doesn’t come with a FedEx Cup title — would be quite an exclamation point.

Can Lefty get locked in for France?

To win the FedEx Cup, Mickelson will need to win at East Lake and have five other things break the right way. It’s possible, but not realistic. Mickelson’s real focus here should be getting his game sharp for the Ryder Cup next week. His 2018 season has certainly had some bright moments. But Lefty has been anything but consistent through the year. Mickelson will not necessarily need to be the best player on the team for the Americans to win their first Ryder Cup in Europe since 1993, but his game will need to be sharp. A good performance at East Lake would be a nice step in the right direction.

Patrick Reed has been the United States’ best player at each of the last two Ryder Cups. He was one of very few bright spots in an otherwise forgettable 2014 loss, and was the leader both emotionally and with his clubs in 2016’s triumph. When he won the Masters, it seemed like the 2018 season would belong to Reed. But since finishing in fourth place at the U.S. Open, Reed has only one other top-10. Jim Furyk and the rest of the American team would certainly love to see a good finish from Reed in the final event before the Ryder Cup.

In 2018, Woods has had two runner-up finishes, four other top-10s, made the American Ryder Cup team, and heads to East Lake as the No. 21 ranked player in the world. Given where he was a year ago, he doesn’t need a win in 2018 to make this year an unqualified success. But it certainly would help. Also, imagine Tiger winning at East Lake then going to France and having a strong Ryder Cup. That would certainly make the 2019 season a lot of fun to think about.

Koepka needs to win and get some help (though not much) to claim the FedEx Cup. Johnson needs only to win. But each of these men are fighting for more than the Tour Championship and the FedEx Cup at East Lake. Rose holds the No. 1 ranking in the world, but only narrowly over both Koepka and DJ, who could both claim the top spot this week. For Koepka, it would be a first and would be a fitting way to cap off the aforementioned fantastic run he’s been on for more than a year. Johnson would certainly like to head into the offseason having reclaimed the spot he’s had for much of the last two years.

Thomas is one of five men who needs no help at the Tour Championship. If he wins at East Lake, he claims the FedEx Cup. Should that happen, Thomas would make some history. He’d join Tiger as the only multi-time winner of the FedEx Cup (note: other past champs in the field include Billy Horschel, McIlroy, and Woods, but Thomas’ chances of winning are much better). Additionally, if Thomas claims the FedEx Cup, he’d be the only back-to-back champion in its history. That would be quite a stamp to put on the phenomenal two-year run that Thomas has enjoyed.