The 2023 World Junior Championship is about to wrap up in Halifax, Nova Scotia, Canada, with Czechia taking on the host country, Canada, in the gold medal game. Despite the elite talent on the Canadian roster, the driving force of the team’s march to another gold medal has been the consensus top prospect in the 2023 NHL Draft, Connor Bedard.

For those who may need a refresher on the 17-year-old’s accomplishments, he’s destroyed every Canadian tournament scoring record in just six games. Bedard overtook the country’s all-time scoring record in goals and points thanks to an offensive output of nine goals, 14 assists and 21 points.

Thus far, he’s scored timely goals during the World Junior Championship, like the game-winner in overtime in the quarterfinals against Slovakia, advancing his team back to the final four.

Furthermore, he’s involved in almost every scoring opportunity. Connor Bedard leads the tournament in shots on goal, thanks to his above-average hockey IQ.

Bedard’s future includes another chance for a gold medal and an opportunity to build upon his newly minted scoring records six months before walking across the stage at the 2023 NHL Draft. However, the kid born in North Vancouver, British Columbia, has one more game left to cement his legacy as the country’s most outstanding player of all time.

The average junior player would be nervous about stepping foot on the ice in a building packed with supporters across an entire country. However, the United States team appeared unfazed by the environment and jumped to an early 2-0 lead before Bedard opened the scoring midway through the first period. The rest, as most writers say, is history.

Canada scored six straight goals, finishing off their southern rivals by a 6-2 score, despite getting outshot 45-37. Interestingly, the United States scored twice, but goalie interference challenges negated both goals. Canada continued to roll without any further hiccups.

The game’s turning point occurred when Bedard, fresh off a night where he broke four scoring records with a single goal against Czechia, lit the lamp. His goal turned out to be the spark the Canadian team needed to get back into the game and feed off a newly energized crowd. This moment in time further cemented his legacy as a bona fide superstar. 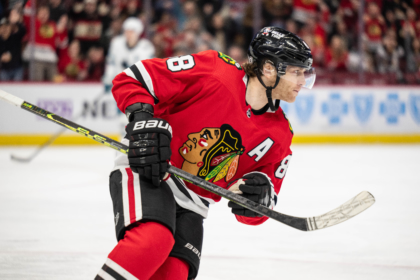 Connor Bedard is on the cusp of achieving tournament greatness

The World Junior Championship scoring record currently belongs to Peter Forsberg (Sweden) who registered 31 points at the 1993 tournament. Sadly, the Swedes lost that year in the gold medal game, meaning his team couldn’t win when it mattered most despite all the individual success. Connor Bedard just broke the Canadian tournament record for all-time points (32) and points in a single tournament (19), with one more game left to play.

Bedard will have difficulty breaking Forsberg’s records for career points (42) or points at a single tournament on Thursday. However, he is in a prime position to achieve something the Hockey Hall of Famer never did: win a gold medal to complement his individual success.

Interestingly, Eric Lindros, the former Canadian scoring record holder, won back-to-back championships in 1991 and 1992 — cementing his place among the country’s all-time greatest players. Meanwhile, Jordan Eberle, who once held the country’s goal record, won a gold and silver during his time with the program, placing himself amongst the country’s most significant players of all time.

Canada’s leading sports network, TSN, once voted Fosberg as the tournament’s greatest player of all time; however, they could reopen the debate should Bedard walk away with a gold medal this year.

All eyes of the hockey world will be focused on Thursday’s gold medal game as Canada chases their 20th championship and their star player chases immortality a few months before joining an NHL franchise as their top prospect.