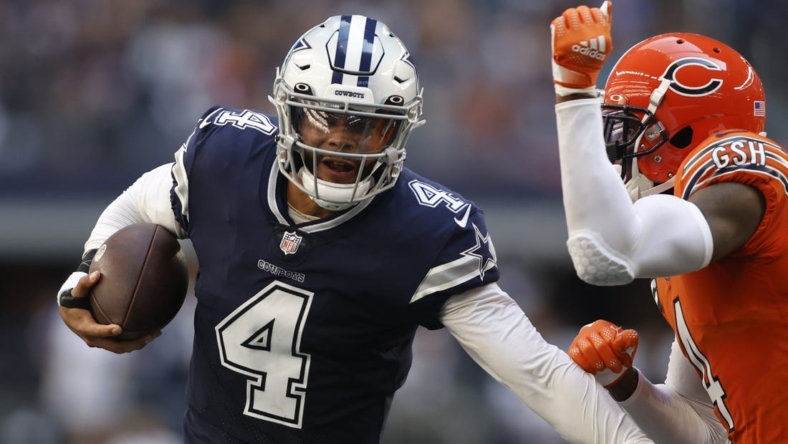 Tony Pollard ran for 131 yards and three touchdowns to key the host Dallas Cowboys’ dominant 49-29 victory over the Chicago Bears on Sunday at Arlington, Tex.

The Cowboys (6-2) have won six of their past seven games and dealt the Bears (3-5) their fourth loss in their past five.

Pollard got the start with Cowboys running back Ezekiel Elliott nursing an ailing knee as Dallas hopes he will be ready to return after the team’s bye week in Week 9.

Pollard paced a Dallas offense which was potent from the start, scoring on its first four possessions and delivering the highest scoring output of any team in the league so far this season.

Dak Prescott continued to regain his rhythm in the Cowboys offense after returning last week. Prescott completed 21 of 27 passes for 250 yards and threw a pair of touchdown passes and one interception. His first went to CeeDee Lamb, who led all Dallas receivers with five catches for 77 yards.

Led by quarterback Justin Fields, Chicago fought its way back in the game in the first half after falling behind 28-7. Eddie Jackson also had a key interception with 28 seconds left in the first half which led to a Cairo Santos field goal on the last play of the second quarter.

Fields threw two touchdown passes and completed 17 of 23 for 151 yards while also rushing for another touchdown and finishing with 60 yards on eight attempts on the ground.

But the Bears’ momentum was sapped by a costly turnover with five minutes left in the third quarter. David Montgomery caught a short pass over the middle from Fields and was stripped by Leighton Vander Esch.

Micah Parson scooped up the fumble and went to the ground, but was not touched by any of the Bears including Fields who leapfrogged over him on the play. Parsons alertly got up and returned it 36 yards for a touchdown to give Dallas a 42-23 lead.

The Cowboys defense finished with four sacks overall. Herbert led the Bears in rushing with 99 yards on 16 carries.