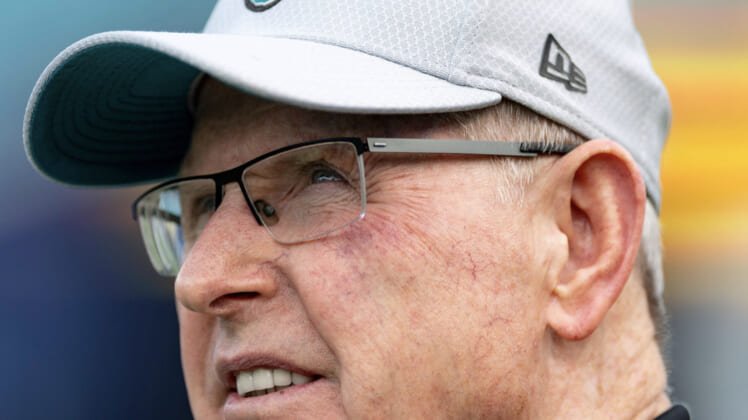 Almost everyone on the Jacksonville Jaguars showed up to the team’s voluntary offseason conditioning program. The exceptions were cornerback Jalen Ramsey and linebacker Telvin Smith. And Tom Coughlin is not happy about the no-shows.

Coughlin, Jacksonville’s executive vice president of football operations, was highly critical saying, “quite frankly, our players should be here building the concept of team, working hard side by side, constructing our bond of togetherness, formulating our collective priorities and goals,” per Michael DiRocco of ESPN.

“Success in the NFL demands struggle,” Coughlin said. “Those who have everything given to them become lazy, selfish and insensitive to the real values of team. The hard work that many try to avoid is the major building block for the development of an outstanding football team. … “It’s not about rights and privileges. It’s about obligations and responsibility, and the question is: Can we count on you?”

This is the first time that Smith, who was drafted in 2014, has missed this workout. In the case of Ramsey, it was a little more expected. He missed last year’s, as well.

The difference is that in 2017, the Jaguars were coming off of a successful season that ended in the AFC Championship Game. In 2018, Jacksonville went 5-11 and was arguably the NFL’s most disappointing team. Coming off of a bad season will no doubt add to the frustration when players don’t show up.

If nothing else, it definitely feels like the performances Ramsey and Smith will now be scrutinized even more by Coughlin.