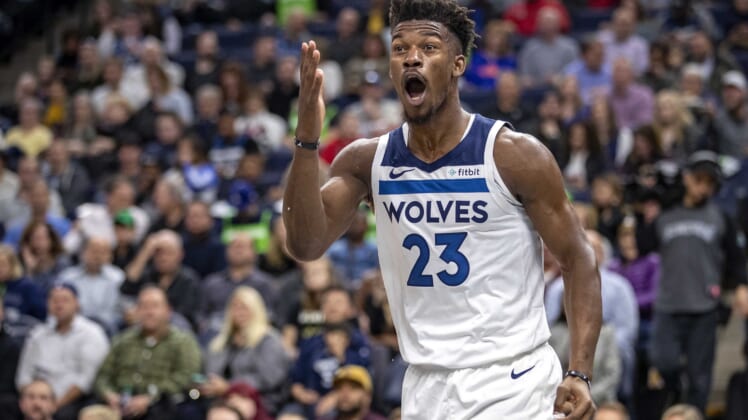 It’s past time, Minnesota. Jimmy Butler is an exceptionally talented player, but his days with the Timberwolves should be over yesterday.

The All-Star guard demanded a trade shortly before the 2018-19 NBA season began, and the franchise quickly looked into a deal. However, no discussions resulted in a finalized move — perhaps because of greed.

Minnesota apparently had made significant progress with the Miami Heat in a swap that would’ve brought back Josh Richardson. Instead, the Wolves pushed for more, and the Heat removed themselves from discussions.

One thing is certain: Butler, who has a player option for 2019-20, isn’t staying next year.

While that doesn’t mean Minnesota must accept pennies on the dollar, it shouldn’t be shying away from 75 cents. Since the Wolves have no leverage, they won’t be offered much, if any, better than Richardson.

But they wanted more.

So, the team headed into the regular season with Butler on the roster. He arrived to a chorus of boos and has since missed a game due to “precautionary rest.” Minnesota ruled him out a second time due to an unspecified illness.

Yeah, he’s sick of playing there.

That happened shortly after reports emerged that the Houston Rockets offered four first-round picks over the next seven years for Butler.

In fairness to the T-Wolves, it’s unlikely any of the draft choices would eventually fall in the lottery. If the Rockets get Butler alongside James Harden, Chris Paul and Clint Capela for four seasons, they’re a contender every year. And, yes, late first-round choices have a low hit rate.

But when you know the superstar is leaving, wouldn’t it be better to have four extra chances to stack the roster around cornerstone Karl-Anthony Towns? Uh, yeah.

Sure, Minnesota could wait until Feb. 7 trade deadline. Every day, though, the realistic asking price will fall. The longer the Wolves wait, the less they’ll receive in return.

The trade is inevitable. Get it done.