The evolution of the worst trade in NBA history

The Nets were attempting to make a splash having just moved from New Jersey to Brooklyn. The idea was to get this re-energized New York City neighborhood excited about the return of professional sports.

The year was 2013, and the conference-rival Boston Celtics had just been eliminated in the first round of the NBA Playoffs. Fans were growing tired of a lack of contention after Boston — then led by Doc Rivers — was years removed from an NBA Finals appearance and a title.

These two teams came together in a trade that would ultimately shape the future for each franchise. At that time, it sure looked like Brooklyn was setting itself up for a short-term run at the Larry O’Brien trophy. 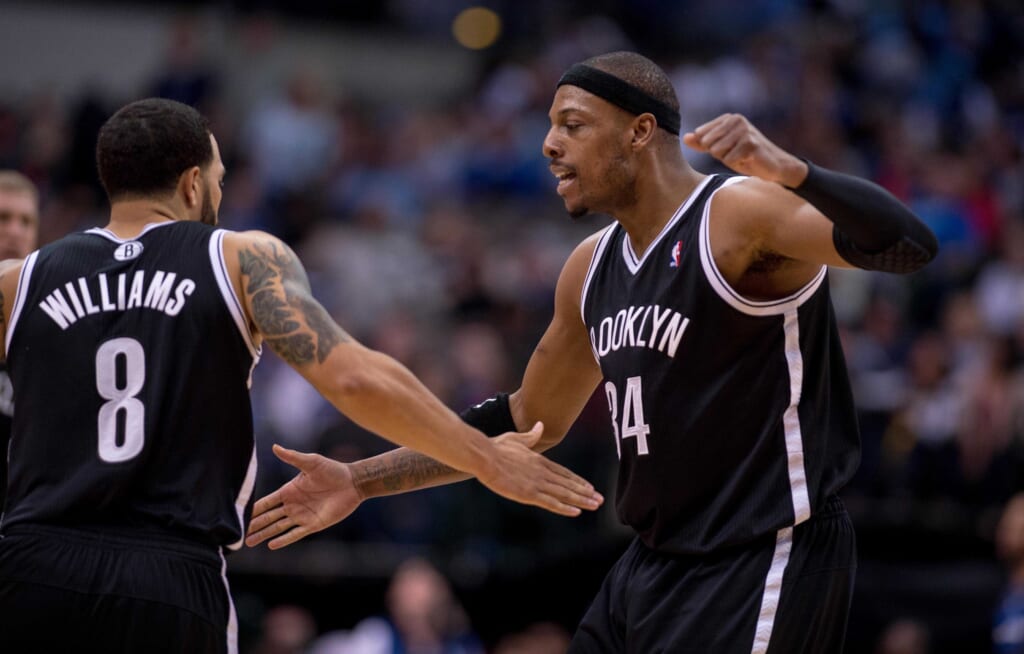 In what amounted to as nothing less than a true blockbuster trade, Boston sent future Hall of Famers Kevin Garnett and Paul Pierce to Brooklyn in exchange for Gerald Wallace, Kris Humphries, MarShon Brooks, Kris Joseph and Keith Bogans as well as three first-round picks.

For then Nets general manager Billy King, the trade made perfect sense. At that time, those first-round picks were seen as leverage to acquire star players and compete for a title. They were unlikely to be anything more than late first-round picks in the first place. Trades that teams like the Golden State Warriors and Cleveland Cavaliers have made recently to upgrade their championship rosters.

So while we sit back and criticize the Nets after the fact, it’s important to note that this deal made perfect sense at the time. No one could have foreseen the disastrous next few years.

Brooklyn ended up making the playoffs in each of the next two seasons, making it as far as the conference semifinals in 2013-14. But the team never took that next step. They could not compete with the three-headed monster of LeBron James, Dwyane Wade and Chris Bosh in South Beach.

Garnett, 37 at the time, was coming off the worst statistical season of his career. He lasted less than two full seasons in Brooklyn, playing in a grand total of 96 games while averaging 6.6 points per outing. Pierce was a bit more effective, but he also lasted just two seasons with the Nets.

Meanwhile, in Boston, the Doc Rivers’ era came to an end at about the same time Danny Ainge and Co. pulled off this trade. The idea was to move on from the past and start anew with up-and-coming head coach Brad Stevens. Within less than five years, Boston finds itself playing in the Eastern Conference Finals.

How did this trade age for both teams? How did it ultimately evolve into the worst trade in the history of the NBA? Let’s take a wide-ranging gander at this for a while here.

Not only did the Nets yield practically four lottery picks in the deal, their financial flexibility was non-existent following the trade. While the Summer of 2013 free agent class was extremely weak, the following year represented a who’s who of elite talent.

Fresh off a 2013-14 campaign that saw Brooklyn win 44 games with Pierce and Garnett aboard, the team was not able to be players in the free agent market. Obviously, paying that tandem a total of $28 million surely didn’t help matters here.

What makes this so disturbing in retrospect is the fact that Brooklyn wasn’t able to unload other bad contracts to Boston in the trade. Deron Williams and Joe Johnson, two busts of epic proportions with the Nets, made a combined $40 million that season.

Surely, King’s philosophy was that those two holdovers would team up with Pierce and Garnett to form a dynamic starting lineup. Obviously, that didn’t pan out. Even then, one would think that the Nets might look to move either Johnson or Williams in the trade with Boston. It never came to fruition.

So while other teams back east were improving, the Nets were left with a half-hearted attempt at contention due to the multitude of bad contracts on the roster. This ultimately led to regression and an end to a short-lived era when Brooklyn had five former All-Stars on its roster, four of which were already on the back end of their careers.

The Celtics would go on to use their two first-round picks in 2014 on Marcus Smart and James Young. There was definitely some thought given to the idea of Boston packaging the two picks to move up for either Andrew Wiggins or Jabari Parker. The team was also linked to then Minnesota Timberwolves big man Kevin Love in the lead up to the draft.

All said, this draft wasn’t terribly productive for Boston. Young has played a small role on the team in three seasons, averaging just 2.3 points in 89 games.

Meanwhile, Smart has taken on a larger role recently. He averaged 10.6 points and 4.6 assists this past regular season while playing more of a defensive stopper role. He also played a huge role in Boston’s upset win over Cleveland in Game 3 of the Eastern Conference Finals earlier in May.

Even then, this wasn’t the type of impact draft Boston was hoping for. 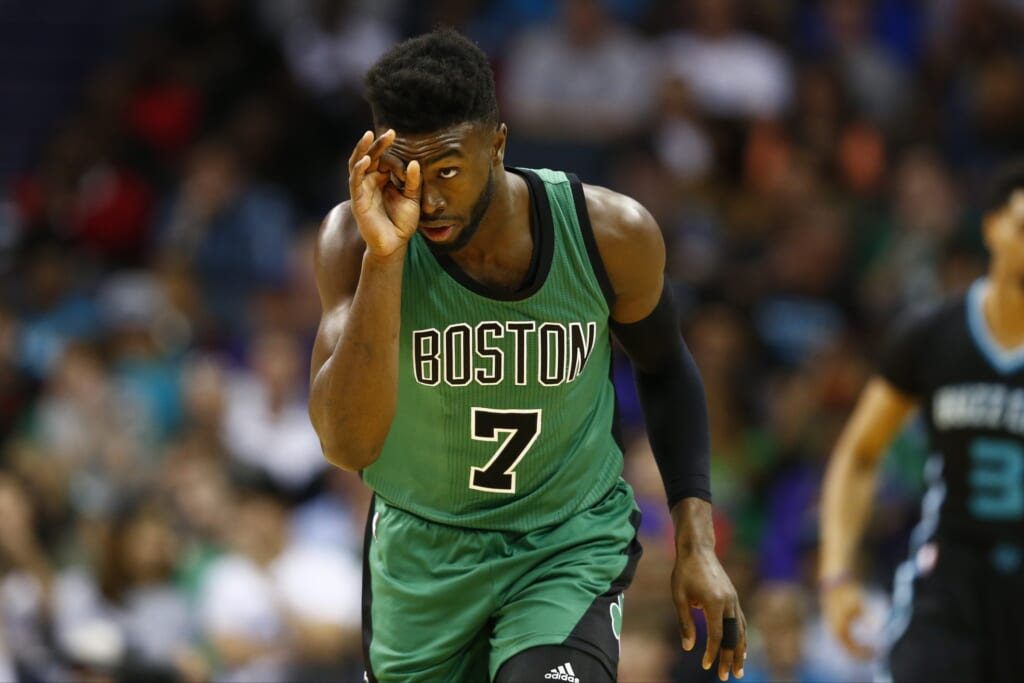 Fast forward two years, and the Celtics found themselves in prime position this past June. Flush with the third overall pick from Brooklyn, many figured Ainge and Co. might look to flip that selection for a veteran star. It didn’t happen. And once the draft itself took place, Boston found itself picking up former CAL standout Jaylen Brown.

Despite seeing inconsistent minutes as a rookie, Brown has definitely shown flashes. He figures to be a starter for Boston over the long term and has taken on a larger role during the playoffs.

The bounty Boston received in this deal has not yet come close to being finalized. We’re looking at a team that will also have the Nets’ first-round pick next season. With Brooklyn being strapped against the cap and boasting the most talent-stricken roster in the NBA, that promises to be a high pick as well.

More than anything, the trade of Pierce and Garnett to the Nets opened up Boston’s pocket books a bit more. It enabled the team to acquire MVP candidate Isaiah Thomas in a three-team trade back in July of 2015.

Indirectly, the trade also freed up room to sign former Atlanta Hawks big man Al Horford. These are the two-best players on a Celtics squad that earned the No. 1 seed this season. That must be taken into account when looking at the totality of the trade.

Boston itself might be a couple years from true NBA Title contention. We’re not too sure where the team is going to go No. 1 overall in June’s draft. Will Danny Ainge and Co. decide to give Isaiah Thomas a max contract? Is Al Horford capable of living up the max deal Boston signed him last summer? Should Boston look to trade defensive stopper Avery Bradley for some more scoring punch?

Even as Boston remains alive in the NBA Playoffs, these are questions that the team is certainly looking go answer right now. And no matter what happens against Cleveland in the remainder of the Eastern Conference Finals, the answers to these questions will dictate Boston’s status as a title contender moving forward.

As for Brooklyn, the way this trade has evolved couldn’t be any more clear.

First off, it has forced other teams away from giving up the farm for short-term additions. When Cleveland dealt two No. 1 overall picks (Anthony Bennett and Andrew Wiggins) to Minnesota for Kevin Love, it already had a roster capable of competing for a title with LeBron James and Kyrie Irving. Even then, the Cavaliers made sure not to trade any future assets to the Wolves for the All-Star.

The same can be said about the New Orleans Pelicans acquiring DeMarcus Cousins from Sacramento back in February. Sure the team yielded a top-10 pick in June’s draft. It also gave up Buddy Hield, who was a top-10 pick last year. But this isn’t a trade that’s going to impact the Pelicans from a draft standpoint following the annual event this year. That’s something to keep in mind.

More specifically, when it comes to Brooklyn, we can look at the team’s lack of young talent and correlate it directly with the trade for Garnett and Pierce.

A vast majority of the players that earned starting minutes for Brooklyn this past regular season were 27 years of age or older. That included Jeremy Lin (28), Brook Lopez (29), Sean Kilpatrick (27), Trevor Booker (29) and Randy Foye (33). None of those players with the exception of Lopez can be considered starter quality.

Of those who are young and saw big minutes for the Nets, not a single one of them can be seen as franchise cornerstones. It’s the talent vacuum that general manager Sean Marks will have to fill moving forward. And while he does come from an organization in San Antonio that has a history of building a contender in a non-conventional manner, there’s very little to work with here.

Not only will Brooklyn be without its first-round pick this year (first overall), it’s first selection next year is also headed to the Celtics. That gives Brooklyn the 22nd and 27th picks in this year’s draft (both acquired via trade) and no first-round pick next year.

Some will point to the Warriors and Cavaliers as two teams that were able to turn it around in relatively short order. But that’s most definitely not par for the course in today’s NBA.

Golden State drafted the core of its team (Stephen Curry, Klay Thompson and Draymond Green). Not until it showed the ability to contend did top-end free agents (Andre Iguodala and Kevin Durant) want to sign.

As it relates to the Cavaliers, they were flushed with No. 1 overall picks. Of course, it started with LeBron James years ago. But his decision to move on to Miami netted Cleveland Kyrie Irving in 2012 and ultimately led to Andrew Wiggins, who was moved for Kevin Love after James decided to return to Cleveland.

That’s the crux of the issue. Short of Brooklyn lucking out on some picks, it doesn’t have the capital to build anywhere near a playoff team moving forward. This is the ultimate definition of mortgaging the future for a short-term run. Brooklyn’s inability to have success after doing just that acted as a retardant for other teams to come later.

So in reality the worst trade in NBA history could have potentially set up another model that has led to the domination of two teams in today’s basketball world. Build through the draft and supplement in free agency. Unfortunately for the Nets, they don’t have that ability. And in reality, it could cost the team three franchise cornerstones in the draft in three consecutive years.

It has also led to an aura of helplessness within the Nets’ fan base in Brooklyn, an area in New York City pining for professional sports. The Nets looked to give these fans what they’ve waited so long for. And in the process, they failed to look at what it might mean for the future. 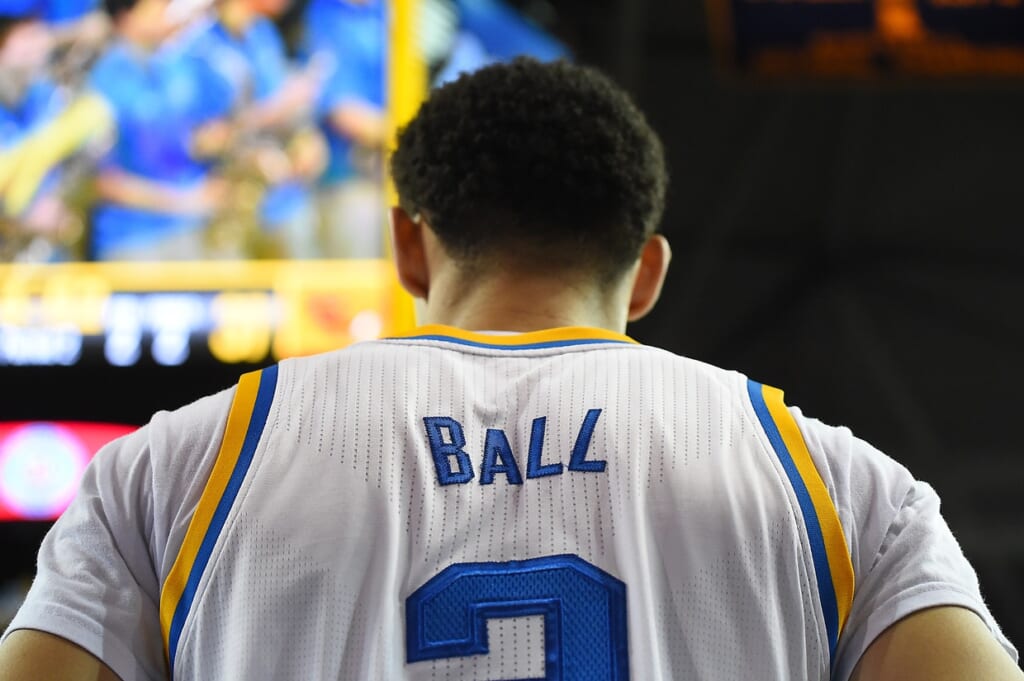 Nets will miss out on Lonzo Ball, among others

By definition, this is what we would call the evolution of the worst trade in NBA history.