Thatcher Demko gets plenty of help as Canucks defeat Kings 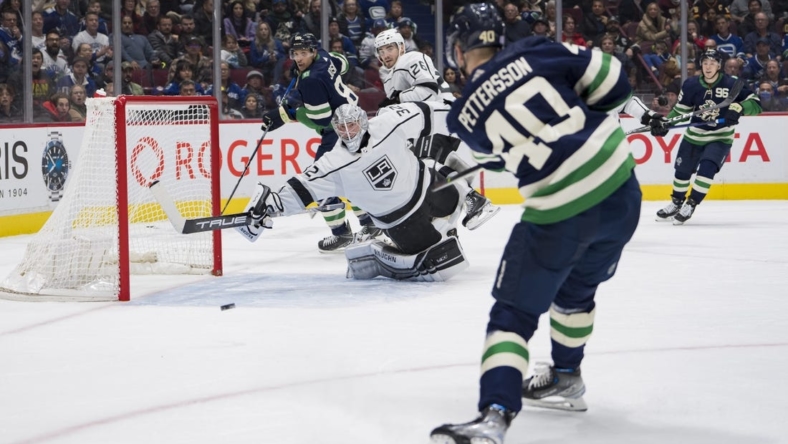 Elias Pettersson and Brock Boeser both scored twice for the Canucks, who have won consecutive games for just the second time this season. Andrei Kuzmenko and Quinn Hughes had two assists apiece.

Blake Lizotte scored for the Kings, who got 21 saves from Jonathan Quick.

After a scoreless first period, Vancouver got on the board in the second.

Pettersson scored on a rush after a pass from Kuzmenko, snapping a wrist shot between Quick’s legs to make it 1-0 at the 5:40 mark.

Boeser then scored his first goal of the season to make it 2-0 at the 10:09 mark, while the Canucks were on the power play. Boeser established position in front of the Kings net and tipped a point shot by J.T. Miller.

Lizotte scored a similar goal for the Kings on the other end of the ice to make it 2-1, deflecting a point shot by Sean Walker past Demko at the 13:46 mark.

It didn’t stay a one-goal game for long, however, as Pettersson scored his second goal of the period 1:04 later, rifling home a wrist shot that a diving Quick couldn’t get to with his paddle. The even-strength goal had the feel of a power play after the Kings had a player break his stick on the sequence.

Boeser scored the lone goal of the third period, making it 4-1 for Vancouver when he crashed the net for a rebound after Sheldon Dries’ shot took a big rebound off Quick’s left pad.

It was all more than enough for Demko, who was sparkling in the Canucks’ net, particularly in the second and third periods, when the Kings fired 18 and 16 shots respectively.

The Kings will play the second game of a road back-to-back on Saturday against Seattle. The Canucks remain home to face Vegas on Monday.