The Texas Longhorns football program had a very successful recruiting campaign during the 2022 spring and summer, and it seems part of the reasons was from shelling out some big bucks to persuade several top high school players that Austin was where they wanted to be.

After losing seven games in his first season as Texas’s top football coach, Steve Sarkisian and the program put forth a massive effort during the 2022 offseason to turn things around, and fast. This summer, the program earned one of its best-recruiting classes in quite some time after landing several top players including elite quarterback prospect Arch Manning. The class was so talent-rich, that it landed the university among the best two or three in the nation. Well, part of that success reportedly came from spending absurd amounts of money on a couple of June weekend visits for a plethora of top prospects.

On Friday, The Athletic published a report filled with financial details on the money Texas University spent on two weekends in June as they tried to land some of the top high school players in America. In total, the university spent $630,000 on travel, food, activities, and other amenities for the athletes that visited Austin on the weekends of June 17-19 and 24-26.

The first weekend that The Athletic was able to obtain expense reports for included Manning — the nephew of NFL greats Peyton and Eli Manning — and eight other recruits. While Manning reportedly unofficially visited the university several times, the trip in June was considered his first official visit to Texas.

With Manning being the top high school QB in the country and a player that is already being seen as a future NFL Draft first-round pick, Texas pulled out all the stops to land the player that could make them a serious contender to win the College Football Playoffs in a couple of years. As The Athletic explains it, Texas rolled out the red carpet for Manning, the other recruits, and their families in a major in June. 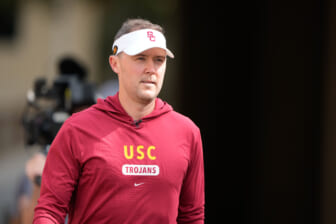 While on the surface that seems like an absurd number to invest in just one weekend of recruits, it worked, and the amount of incoming Texas football will bring in during the Manning era makes that $280,000 a small drop in a massive bucket.