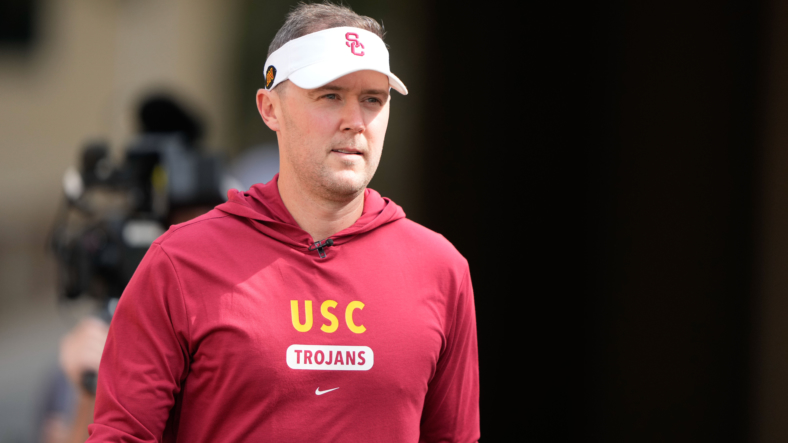 College football Week 3 is here with a ton of interesting matchups throughout the country. Out west, BYU will be looking to put its name in the College Football Playoff conversation against Oregon after disposing of Baylor last week.

Nebraska will officially begin its post-Scott Frost era at home against the sixth-ranked Oklahoma Sooners. Moving a bit further east, Penn State has the pleasure of going into Auburn and facing a Tigers team in front of 87,000 fans inside Jordan-Hare Stadium. These are among the five best games to watch during college football Week 3.

BYU looking to continue hot opening of the season against Oregon

BYU has now won 23 of its past 27 games under head coach Kalani Sitake. Its most-recent win was a potentially program-altering victory over a then ninth-ranked Baylor team at home in Provo last week. Quarterback Jaren Hall continued his solid early-season play as BYU’s offense did just enough to come out on top by the score of 26-20 in double overtime. Meanwhile, Lopini Katoa’s three-yard run in OT ended this one.

“We are here to shake up college football. We are sick of seeing the same four teams in the playoff. We are an independent school about to go into the Big 12. But I think we have a lot of sleepers. I don’t think people really look at BYU and see a team that is ready to win every game they play. But that is what we are here to do.”

BYU’s next test comes against the 25th-ranked Oregon Ducks in Eugene. Dan Lanning’s squad was able to bounce back from a blowout season-opening loss to Georgia to defeat Eastern Washington by the score of 70-14 last week. We have absolutely no idea how good this team is in that it was overmatched against the Bulldogs and played a non-major program last week.

Penn State and Auburn do battle as undefeated teams

Penn State finally finds itself ranked after winning two consecutive games to open the season. That included a Week 1 victory over the Purdue Boilermakers in Indiana and a defeat of Ohio this past weekend. Primarily, the backfield of veteran quarterback Sean Clifford and running back Nicholas Singleton have played the largest role in Penn State’s early-season success. Singleton has put up 210 rushing yards and two touchdowns on 20 attempts. Meanwhile, Clifford continues to do his thing under center.

The Nittany Lions will be up against it inside Jordan-Hare Stadium Saturday afternoon. We’re expecting a full “orange out” here with north of 87,000 Tiger fans rooting their team on. Fresh off an ugly 6-7 season, Auburn has won each of its first two games to open the 2022 campaign. Though, it actually trailed San Jose State at home last week. Facing much more intense competition during college football Week 3, it’ll be interesting to see how Auburn does in this one.

Joseph has a wealth of experience at the college level, including his role as the LSU wide receivers coach from 2017-21. He played quarterback at Nebraska under the legendary Tom Osborne and got his coaching career started with Omaha North High School in the mid-1990s. Joseph also make history as the first Black head coach at Nebraska in any sport.

There’s very little reason to believe that Nebraska will be able to hang with a vastly superior Oklahoma team in what is a rivarly game at Memorial Stadium in Lincoln. Taking over for Lincoln Riley, new Sooners head coach Brent Venables has the team playing good football. It defeated UTEP and Kent State by a combined margin of 78-16 in the first two games. Though, Venables must have Oklahoma ready to play against what promises to be a pumped-up Nebraska team on Saturday.

Texas A&M embarrassed at home by Appalachian State at home last week, losing by the score of 17-14. It’s not an ideal scenario for head coach Jimbo Fisher and Co. heading into a stretch in which the Aggies are slated to play three ranked teams in a four-week span. Never afraid to hold back criticism of his team, Fisher knows what is at stake heading into Saturday’s game against the 13th-ranked Hurricanes at College Station.

“We’re very disappointed. Have to get back out there right now fundamentally. We’ve got a very good Miami team coming in here that’s going to get our attention very, very quickly, and does right now. We have to go play well.”

Texas A&M could be up against it with Mario Cristobal’s Hurricanes playing stellar football. Miami has outscored its first two opponents by a combined margin of 100-20. The backfield of Henry Parrish Jr. and Thaddius Franklin Jr. have been absolutely dominant (344 rushing yards, 7 TD). Meanwhile, Corey Flagg Jr. has racked up 3.5 sacks in two games. A win here would make Miami a top-10 squad for the first time since December of 2020.

Fresno State could prove to be tough out for USC

To say that USC is a much different program under Lincoln Riley would be an understatement. It heads into college football Week 3 with a 2-0 record and having outscored its opponents by a combined margin of 107-42. Oklahoma transfer Caleb Williams has firmly entered the Heisman competition with his stellar play to open the campaign.

Running backs Travis Dye and Austin Jones continues to provide USC balance on offense while star wide receiver Jordan Addison looks to be one of the best players at his position in college football.

Why would we give Fresno State any real shot of winning this one? We really don’t. Rather, it’s all about seeing if USC can maintain this level of play moving forward. The Bulldogs are known for giving big-time programs a difficult time. Heck, Fresno State head coach Jeff Tedford has a history of success against USC dating back to his days with CAL. This could very well be a trap game for the Trojans as they look forward to matchups all Pac-12 opponents prior to a season finale against Notre Dame.