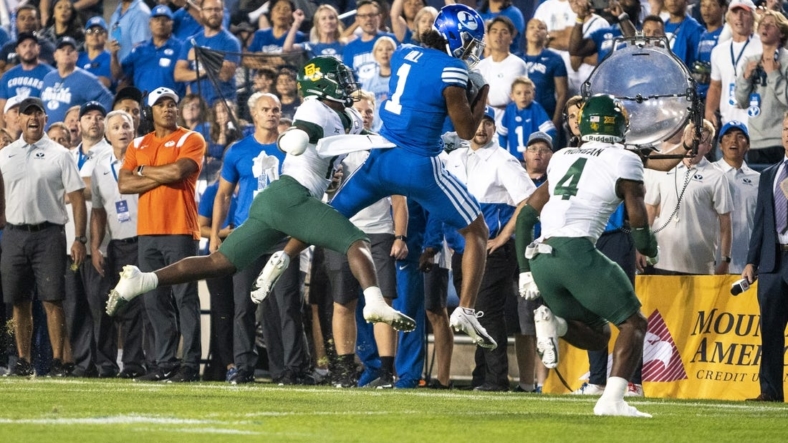 Lopini Katoa scored the decisive touchdown in the second overtime as No. 21 BYU recorded a 26-20 victory over No. 9 Baylor in nonconference play on Saturday night at Provo, Utah.

The Cougars’ defense stopped the Bears on their second possession to seal the win and avenge last season’s 38-24 road loss to Baylor.

Jaren Hall completed 23 of 39 passes for 261 yards and one touchdown for BYU (2-0). Hall also caught a touchdown pass from Chase Roberts, who had eight receptions for 122 yards and one score.

Blake Shapen was 18-of-28 passing for 137 yards and one touchdown for Baylor (1-1). Qualan Jones rushed for two scores and Ben Sims had a touchdown catch.

Hall completed a 20-yard pass to Keanu Hill in the second overtime, which set up Katoa’s 3-yard scoring run. The two-point conversion failed, leaving BYU ahead by six.

Baylor relied on the ground game on their second possession, but two false start penalties created a fourth-and-goal from the Cougars 11-yard line. Shapen’s last-ditch throw was over the head of Seth Jones.

Both teams missed field goals in the first possession of overtime.

Baylor’s Isaiah Hankins lined up for a 43-yard field goal, but his kick missed way to the right.

BYU played conservatively on its possession before Jake Oldroyd was wide left from 37 yards. Oldroyd also was wide left on a 35-yard field goal with eight seconds remaining in regulation.

The Cougars took a 20-13 lead on a double-pass trick play with 1:28 remaining in the third quarter.

Hall threw the ball backward to his left to Roberts, who then tossed the ball forward to Hall on the right. With three blockers in front of him, Hall scampered down the right sideline for the score.

The Cougars struck for Oldroyd’s 27-yard field goal on their opening possession. Baylor finally got on the board with 1:37 left in the first half on Qualan Jones’ 1-yard run but the extra point by Hankins clanked off the right upright.

Hall threw a 20-yard scoring pass to Roberts with two seconds left to give BYU a 10-6 halftime lead.