Texas Longhorns football recruit Arch Manning is one of the top high school players in the nation and he proved it again on Friday when he not only broke one but two records held by his legendary uncles Eli Manning and Peyton Manning.

The 6-foot-3, 204-pound star of Isidore Newman high school is committed to playing for the Longhorns starting in June of 2023. However, before he begins his college football career next year, the grand son of NFL Hall-of-Famer Archie Manning is putting the final touches on a remarkable run at the school.

Related: Texas reportedly spent $630K on 2 recruiting trips for Arch Manning and others

The New Orleans-based Isidore Newman was also the home for both Peyton and Eli Manning before they went on to glory at Tennessee and Ole Miss, respectively, and then the NFL. Unsurprisingly, both had memorable tenures at their and set several school records. Well, two of those records fell last night during the Greenies’ 52-22 win over the Pearl River Tigers.

During the team’s dominant win, Manning showcased why he is an elite QB prospect when he threw for 356 yards and overcame a 110-yard deficit to surpass Uncle Eli for the school’s all-time passing yards record. However, he wasn’t done there. The 18-year-old star also racked up seven touchdowns on the night and blew by Uncle Peyton’s school record of 93. Five of Manning’s TD passes came in the first half of the team’s victory.

What makes Manning’s numbers all the more impressive is the fact that he set two legendary school records while still having four games left on the schedule. The future Longhorns starting quarterback is sure to set marks that may never be broken before the Isidore Newman schedule comes to a close in November. The team’s next game is on Oct. 7 versus Belle Chasse. 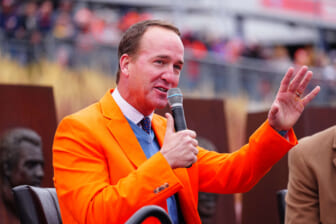 Manning’s recruitment was one of the biggest stories in college football in the spring, as he was pursued by many of the top programs in the nation, including Georgia and Clemson. It was recently revealed that the University of Texas spent over $200,000 during an official recruitment visit that included Manning earlier this year.