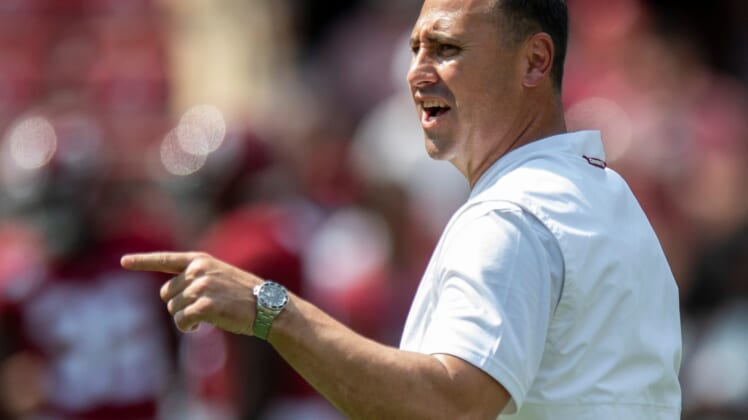 Herman posted a 32-18 record during his four-year tenure, including a 22-13 mark in Big 12 play. The sudden change of direction is particularly surprising since the Longhorns just capped their season with a 55-23 romp over Colorado in the Alamo Bowl.

Chip Brown of 247Sports broke the big news of Sarkisian’s hiring, which marks a stunning comeback and rapid ascent through the coaching ranks following some serious adversity. Athletic director Chris Del Conte confirmed Herman’s dismissal in a statement, part of which is below, courtesy of ESPN.com.

“After much deliberation and a great deal of thought, as I looked back at the totality of where our football program is and in discussing its future, it became apparent that it was in the best interest of The University of Texas to move in a different direction. […] I’m grateful for all Coach Herman has done and the hard work and dedication he and his staff have put in on behalf of our program and student-athletes. I [thank] him for all of his efforts and his service to our institution, and I wish him the best in the future.”

Sarkisian had a decent tenure from 2009 through 2013 with the Washington Huskies before leaving to take the job at USC. After a solid 9-4 campaign to start out, Sarkisian only lasted five games into the next season, as he was fired due to substance abuse issues.

Since that fall from grace, Sarkisian has managed to find his footing in a big way. He returned to coaching as an analyst for the Crimson Tide in 2016, and proceeded to embark on a two-year stint as play-caller for the Atlanta Falcons before being fired.

Just when it looked like things weren’t going so well, once again Nick Saban called him up to come back to Tuscaloosa. Since January 2019, Sarkisian has been offensive coordinator at Alabama, dialing up all kinds of explosive plays for the Crimson Tide’s elite unit and helping quarterbacks like Tua Tagovailoa and Mac Jones put up historic numbers in terms of passing efficiency.

With Alabama still in the College Football Playoff after defeating Notre Dame, thanks largely to Jones and DeVonta Smith connecting on three touchdowns through the air, it’s likely Sarkisian won’t take his post at Texas until after the national championship game against Ohio State.

The bigger question is why Herman was let go so abruptly. It’s something that may never be fully determined.

There’s bound to be some costs to turning over the program, and whatever high-end recruits the Longhorns expected to arrive this year may well follow Herman to his next job if he lands with another Power 5 program.

One thing Sarkisian can hang his hat on regardless of his staffing decisions is his evident ability to develop quarterbacks. In addition to Tagovailoa and Jones at Alabama, he fostered the development of Jake Locker at Washington, turning him into an eventual first-round NFL Draft pick.

According to 247Sports, Texas is slated to have the 17th-ranked 2021 recruiting class. It’ll take some convincing for Sarkisian to get those players to stick around, yet he does bring credibility thanks to his success with the Crimson Tide and overall solid job at previous stops.

With senior quarterback Sam Ehlinger leaving the program and several other players destined for the 2021 NFL Draft, it’ll take an extraordinary effort for Sarkisian to have the Longhorns competing for a Big 12 championship in his first season at the helm.