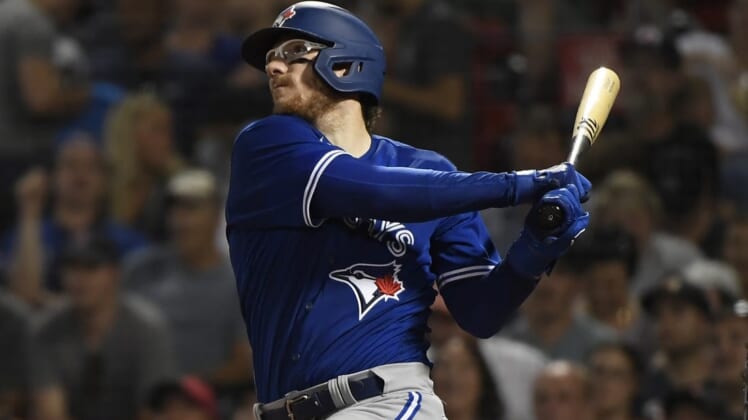 The 28 runs scored and 29 hits were both Toronto club records. The 28 runs allowed were the most ever by the Red Sox.

Vladimir Guerrero Jr. doubled with one out in the first, took third on Alejandro Kirk’s infield hit, and scored on Bo Bichette’s groundout to the pitcher.

Gurriel singled to start the second and Chapman hit his 16th homer of the season.

Kirk singled in the third and took third on Bichette’s double. Hernandez walked to load the bases, and Gurriel hit a two-run single. Santiago Espinal added an RBI single.

Jansen walked, and Austin Davis replaced Eovaldi. Tapia then hit a fly ball to center field, but Jarren Duran lost sight of it and it fell far behind him, going for an inside-the-park homer. It was Tapia’s fifth homer of the season.

Hernandez hit his 13th homer of the season in the fourth and Jansen had a three-run shot later in the inning.

Vazquez hit a solo homer in the bottom of the fourth, and Bradley later hit his second homer of the season, a two-run blast.

Toronto scored 11 runs with two out in the fifth, an inning that continued when, with the bases loaded, Chapman’s popup in front of home plate dropped and went for an RBI hit. Kaleb Ort allowed eight of the runs on seven hits in two-thirds of an inning.

Jansen hit his ninth homer of the season in the sixth, a two-run shot against Darwinzon Hernandez.

Vazquez hit his eighth homer this season in the bottom of the sixth, and Refsnyder hit his fourth in the seventh, both against Jeremy Beasley.