Stephen Jones: Cowboys all in on Dak Prescott, Tom Brady ‘not even a thought’ 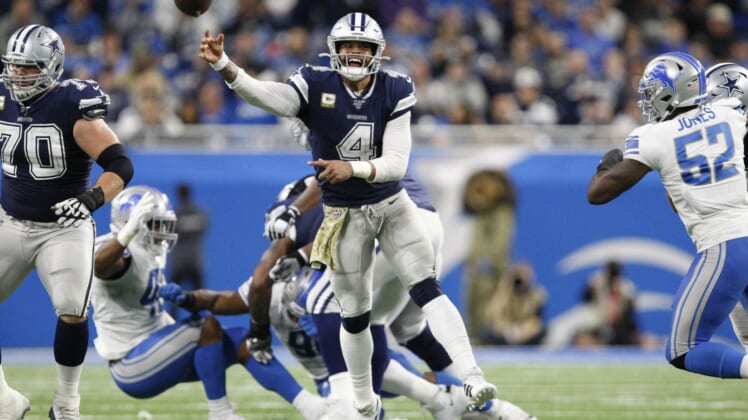 The Dallas Cowboys enter the offseason with quarterback Dak Prescott set to enter free agency, and there are rumblings that Tom Brady may be the answer.

Speaking about Prescott on 103.3 FM ESPN Friday, Jones made it clear (via Jon Machota of The Athletic) that Dallas wants to re-sign both Prescott and Amari Cooper (also a free agent) but that, “We’ve got to land the plane and it starts with Dak. He’s the leader of this team. He’s got the ‘it’ factor.”

Even more forcefully, Jones then threw cold water on any Brady-to-Dallas talk: “Not even a thought. We’re so, so all in on Dak. [Mike McCarthy] is so all in on Dak. He’s so convicted that [Dak’s] the guy that can help us win championships. He’s putting together a great staff to support him.”

Prescott is coming off the best season of his young career, by far. He completed 65.1% of his passes for 4,902 yards with 30 touchdowns and 11 interceptions. Unfortunately for him and the ‘Boys, the season was defined by poor discipline and awful in-game decision making by former head coach Jason Garrett.

Now, with Mike McCarthy leading the charge, Prescott has a chance to take yet another positive step in his development in 2020. The only thing that’s up in the air at this point is how much he’ll make doing it. At the least, Dallas will use the franchise tag to secure him. But if a long-term deal is finally struck, it will set records and potentially even eclipse $40 million per year on average.