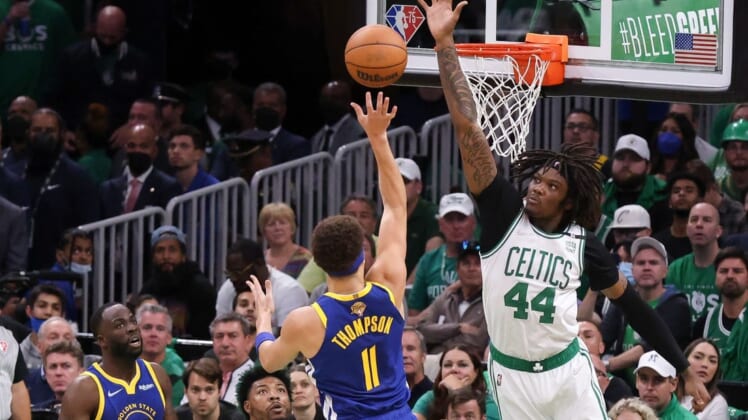 Stephen Curry scored 34 points and the Golden State Warriors returned to NBA glory Thursday with a 103-90 victory over the host Boston Celtics in Game 6 of the Finals to win their first championship in four years.

Andrew Wiggins scored 18 points and Jordan Poole added 15 as Golden State won its fourth title in eight seasons. The Warriors came out on top just two seasons after finishing a league-worst 15-50 after injuries to both Curry and Klay Thompson, who scored 12 on just 5-of-20 shooting on Thursday in the finale of the best-of-seven finals.

Both stars were in good health and on top of the world in Game 6, standing side by side during a team hug after the final buzzer. Draymond Green contributed 12 points, 12 rebounds and eight assists for the Warriors, who won despite shooting 41.3 percent from the field.

Jaylen Brown scored 34 points and Al Horford added 19 points and 14 rebounds for the Celtics, who were making their first NBA Finals appearances since 2010. Boston last won the championship in 2008.

Celtics star Jayson Tatum was held to 13 points on 6-of-18 shooting.

The only blemish on the Warriors’ day was brief, when they trailed 14-2 after four minutes following a 12-0 run by the Celtics. Boston led 22-16 late in the first quarter before the Warriors erupted for a 21-0 run to take a 37-22 lead with just over 10 minutes remaining in the half.

When Curry drilled three 3-pointers in the first six minutes of the third quarter, Golden State pushed its lead past the 20-point mark at 72-50. Curry shook his head in the affirmative and began pointing to his ring finger.

The Celtics finally pulled within single digits at 74-65 on a three-point play by Al Horford with 44.1 seconds remaining in the third, and the Warriors were up 76-66 heading into the final quarter.

The Celtics never got inside of eight points the rest of the way as they were done in by 23 turnovers. Curry sealed the victory on a 3-pointer with 3:17 remaining for a 96-81 lead.

After an opening-round sweep of the Brooklyn Nets in the first round of the playoffs, the Celtics went just 4-6 on their home court the rest of the way.