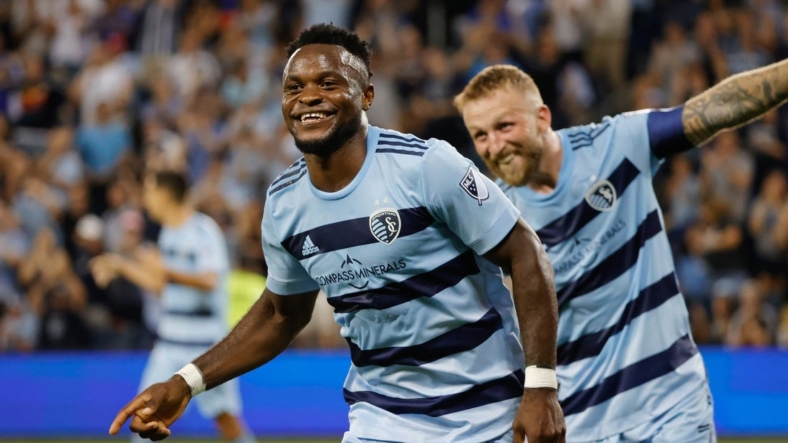 Sporting Kansas City welcome the San Jose Earthquakes to town Saturday in a matchup between two of the three worst teams in the Western Conference, although both clubs have plenty to play for down the stretch.

Sporting KC (7-15-5, 26 points) get another a chance to see young players develop and new signings mesh with the team. If last Sunday’s 4-1 win over the Portland Timbers is any indication, they have hit on a much better combination of personnel.

Sporting KC have scored 11 of their Western Conference-worst 30 goals in the last three games, when they put together two of their seven wins.

“At times, our psyche is a little fragile which is normal sometimes in this state,” SKC head coach Peter Vermes said. “We’re trying to find ourselves. We’re trying to get to a place where we feel comfortable in those situations. If you look at the last three games, we scored four goals, three goals and four goals. That part is excellent.”

A big part of the offensive resurgence has been the addition of William Agada.

Agada has played five games with the club, scoring five goals with one assist in the past three games. He is only the third player in team history to have five goals through his first five games, along with Felipe Gutierrez in 2018 and Miklos Molnar in 2000.

“The atmosphere was electric,” Thompson said. “I give a lot of credit to the fans that came out to support us. There is no doubt we’ve had some difficult moments this year, but it’s moments like that that shows the strength of this team mentally, physically, and the ability that we have to compete with some of the best teams and the best players in this league.”

Cade Cowell scored the game-winner, just his second goal of the season. It was much-needed production from Cowell, who had a breakout 2021 season that saw him score five goals with four assists in 33 games to earn some time with the United States Men’s National Team.

San Jose will be without defender Nathan after he was suspended due to yellow-card accumulation.