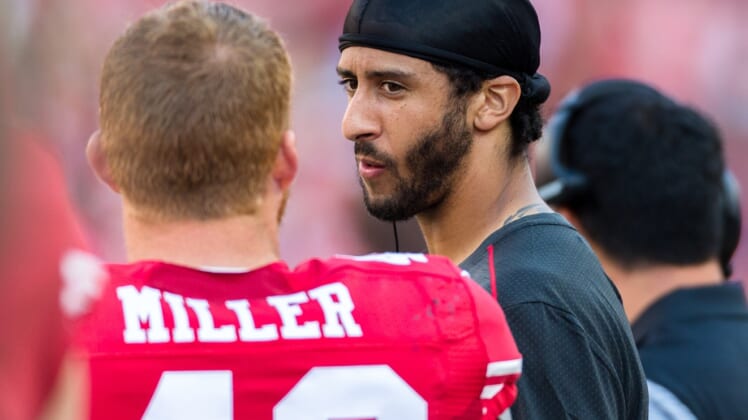 It’s no secret the New York Jets haven’t struck gold at the quarterback position in many a long year, and one prominent fan wants the team to make a bold move for Colin Kaepernick as a means to potentially flip the script on that story.

Spike Lee, who spent some time with Kaepernick on Sunday, shared a picture of the two of them together with quite a strong message attached to it.

“Just Had Brunch With My Brother Colin @Kaepernick7 . How Is It That There Are 32 NFL Teams And Kap Is Still A Free Agent? WTF. Smells MAD Fishy To Me, Stinks To The High Heavens. The New York J-E-T-S Need A Quarterback. Who Is The J-E-T-S Quarterback? Is My Man Joe Willie Namath Coming Back? Crazy Times We Live In. The Question Remains What Owner And GM Is Going To Step Up And Sign Colin So Their Team Has A Better Chance To WIN? What Crime Has Colin Committed? Look At The QBs Of All 32 Teams. This Is Some Straight Up Shenanigans, Subterfuge, Skullduggery And BS. Ya-Dig? Sho-Nuff. By Any Means Necessary. And Dat’s Da NoFunLeague Truth, Ruth.”

A lot has been reported and speculated on regarding Kaepernick’s continued lack of interest in NFL circles. One report indicates NFL owners and top brass can’t stand him and/or just find him to be “an embarrassment to football.” Another report indicates at least some owners fear backlash if they do sign him to their team.

It seems clear that the quarterback’s hard-line stance last season in which he refused to stand for the national anthem is costing him a chance to play in the NFL right now.

Regardless, Kaepernick has found a way to remain focused on helping those in need even if he doesn’t earn another dime from the game. His latest compassionate act was to acquire air transportation to send goods to people desperate for help in Somalia.