Star guard Spencer Dinwiddie played all of three games with the Brooklyn Nets this past season prior to suffering a partially torn ACL.

This didn’t stop Dinwiddie from opting out of his contract valued at $12.3 million for the 2021-22 campaign. The 28-year-old guard believes he’ll be met with a robust market when NBA free agency opens.

It was previously reported that Dinwiddie was looking for comparable money to what Malcolm Brogdon received from the Indiana Pacers back in July of 2019. That is to say, $85 million over four years. Even at this rate, it was going to be incredibly unlikely that the Nets ante up that amount of cash given that they have Kyrie Irving and James Harden starring in the backcourt.

Now comes this note from Spencer Dinwiddie himself. He’s looking for a whole heck of a lot more from the Nets to re-sign in Brooklyn.

“But the Nets have the ability to do something other people can’t. If the Nets come to the table like that and they’re being aggressive and saying, ‘Hey, we got five years/$125 million for you,’ like I would say, there’s a high likelihood that I go back to the Nets,” Dinwiddie told Sports Illustrated’s Howard Beck (h/t SB Nation).

That’s $25 million annually for a player who is coming off a serious knee injury. It’s also a sum the Nets are not going to be willing to pay, especially considering their luxury tax situation.

While it’s highly unlikely that Dinwiddie will get $25 million annually, there’s going to be interest in his services.

Back in 2019-20 with Kevin Durant sidelined for the entire season and Kyrie Irving missing the stretch run, the former second-round pick led Brooklyn to a surprising playoff appearance in the Orlando bubble. Dinwiddie averaged 20.6 points, 3.5 rebounds and 6.8 assists.

The veteran guard has been linked to his hometown teams in that of the Los Angeles Lakers and Los Angeles Clippers. He’d love to return to his Southern California roots. Depending on his market, both teams could make sense.

The Lakers are likely going to be looking for an upgrade at point guard over pending free agent Dennis Schroder, who is also said to be demanding a ridiculous amount on the open market. Meanwhile, the Clippers must find a ball-dominant guard after having to rely on Kawhi Leonard and Paul George to run things at times toward the end of the 2020-21 season. 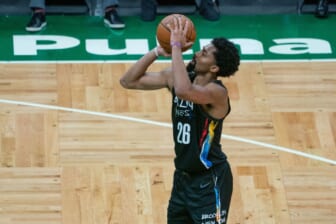 The issue here is cap room. Neither Los Angeles team will have the cash to sign Dinwiddie outright. That’s where a potential sign-and-trade with the Nets could come into play. Nets general manager Sean Marks touched on that possibility in his season-ending press conference earlier in July.

“We’ll deal with Spencer when the time comes,” said Marks. “And, obviously, Spencer has put himself in a position to secure his future long-term. We’d obviously love to play a role in that, whether that’s here or whether we can help them. But you know, we’ll focus on that at a later date.”

But again, it’s all about matching salaries and the Nets’ luxury tax situation when it comes to Spencer Dinwiddie. Would they be willing to pay a much higher tax by acquiring, say, Kyle Kuzma from the Lakers as part of a sign-and-trade? Who on the Clippers’ roster outside of Leonard and George would the Nets be interested in?

Either way, Dinwiddie’s market might be a determining factor here. Interestingly enough, the Nets would be in a better position when it comes to a sign-and-trade if his $25 million asking price was met by another team.