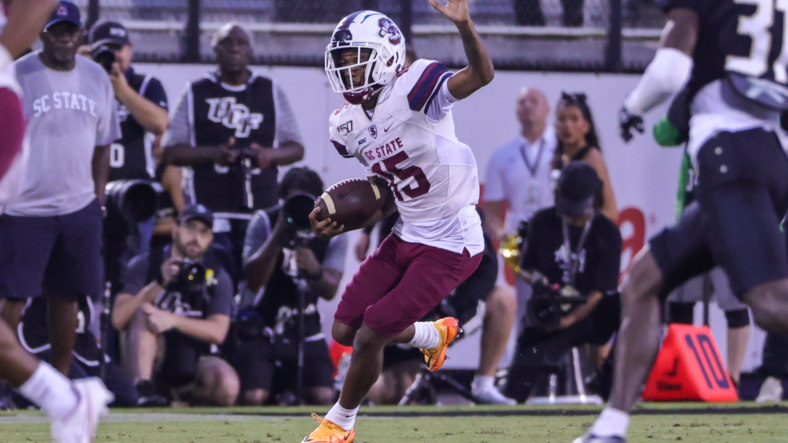 We see something unique in college football just about every weekend. While we haven’t even made it to Labor Day weekend just yet, it’s probably safe to say we’ve already seen the strangest failure of Week 1. This gem belongs to the South Carolina State punter.

Facing a 4th-and-19, the SC State Bulldogs called a fake punt run, but what happened after that, is anyone’s guess.

Credit the punter for trying something new?

Not really, because it’s illegal.

Maybe he got too excited, and possibly even a bit scared as the UCF defenders were barreling down on him, but the punter basically ditched the ball instead of getting hit, reminding all of us of a game we used to play in the backyard.

We don’t know what that was, or why he didn’t just try and complete the play, going the extra seven yards for the first down at that point, but at least it provides some comedy. Of course, the referees promptly threw the penalty flag, but they were probably just as confused as everyone in the stadium as to what they just witnessed.

On the bright side, his year likely couldn’t get any worse. It should be all uphill from here. Hopefully he knows the rules for the next time he’s involved in a punt. Freshman running back Tyler Smith is the only player listed with the No. 15 on the SC State football website. We’re not sure if that’s who actually committed this blooper or if it was an actual punter. Either way, it was a mess.