Seven players who stood out in Rams’ thrilling win over 49ers 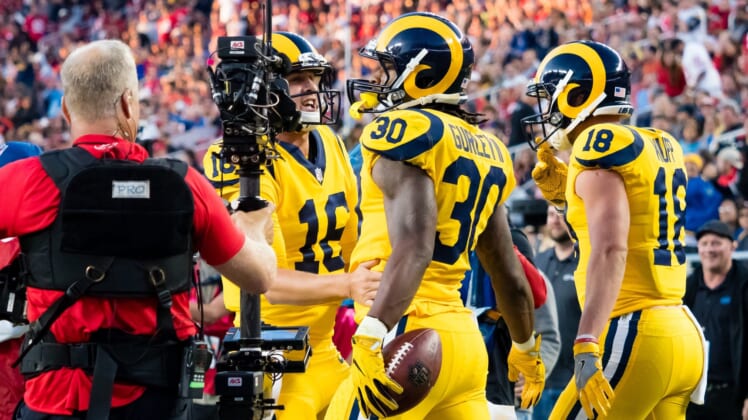 Well, that was fun. There were very few experts out there who believed Thursday night’s game between the San Francisco 49ers and Los Angeles Rams would result in 80 total points and 10 touchdowns. But that’s exactly what we saw in a narrow 41-39 win for the road team.

Going into Santa Clara on a short week, the Rams’ offense absolutely dominated what had been an impressive San Francisco defense. Jared Goff found connections with Sammy Watkins and Robert Woods at receiver. Meanwhile, Todd Gurley did his thing on the ground.

Not to be outdone, new 49ers head coach Kyle Shanahan called a good game on offense. It took a questionable offensive pass interference call at the end of the game for the 49ers to fall by two points.

Here are seven players who stood out in the Rams’ win over San Francisco on Thursday Night Football. 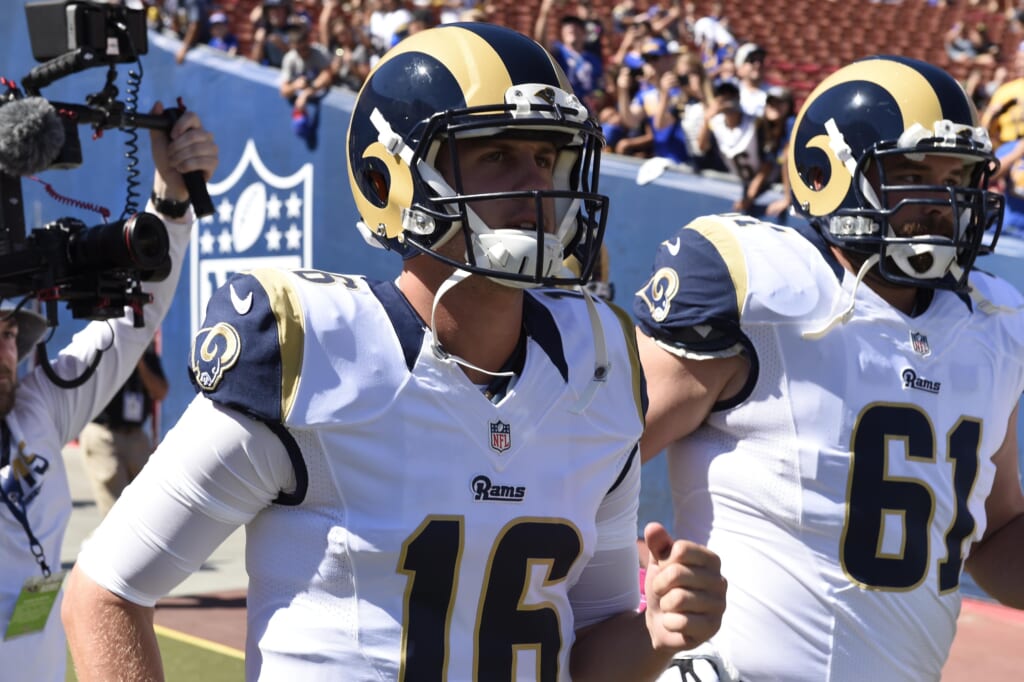 Goff is a completely changed quarterback from what we saw during a disastrous rookie season. After throwing a game-changing pick in a Week 2 loss to Washington, Goff came back big time on Thursday and dominated what ultimately became an injury-ravaged 49ers defense.

With a clean pocket throughout the evening, Goff had time to see the field and hit multiple receivers for huge plays. This one pass to Sammy Watkins was a prime example of that. When all was said and done, Goff completed 22-of-28 passes for 292 yards with three touchdowns and zero interceptions in an impressive performance.

It might now be time to talk about this youngster as a legitimate starting quarterback in the NFL. He was absolutely brilliant in front of a national audience on Thursday night.

Jared Goff has obviously found a connection with the newly acquired Sammy Watkins. But he also seems to have a nice rhythm with this fellow former Bills receiver. Woods put up three catches for 65 yards on three targets in the first half alone.

He also withstood this violent hit from Jimmie Ward to help set up the Rams’ final touchdown prior to halftime. Woods finished the night with six catches for 108 yards on seven targets. Talk about production.

We can talk about how Goff and his receivers played until we’re blue in the face. We can continue to focus on Todd Gurley. But in reality, it all started upfront in Los Angeles’ 41-39 win over San Francisco at Levi’s on Thursday night.

This third-year safety entered the season as a backup at strong safety behind Pro Bowler Eric Reid. What he’s done thus far during the year may make it easier for San Francisco to move on from the injured Reid, who is an impending free agent. Tartt opened the season with this brilliant interception of a Cam Newton pass in Week 1.

Now starting Week 3 with Reid sidelined, the small-school product made his impact known prior to exiting in the fourth quarter with a head injury. He broke up a would-be touchdown in the first quarter and continued to make physical plays as the game moved along. All said, Tartt recorded seven tackles and multiple pass breakups in the 49ers’ loss. If nothing else, it looks like the 49ers have some tremendous young talent on defense in which to build. Tartt is certainly a part of that.

Noticing a theme here? The Rams’ offense is good. Really, really good. And for his part, Watkins is starting to make the plays many figured he’d put up when the Buffalo Bills selected him in the top five back in 2014. Not only did he have one highlight-reel catch, Watkins provided a consistent target for Goff throughout Thursday evening.

Prior to exiting with a head injury, Watkins recorded six receptions for 106 yards and two touchdowns. He’s quickly turning into a No. 1 caliber receiver, something the Bills obviously thought the former Clemson star would never be prior to trading him to Los Angeles. 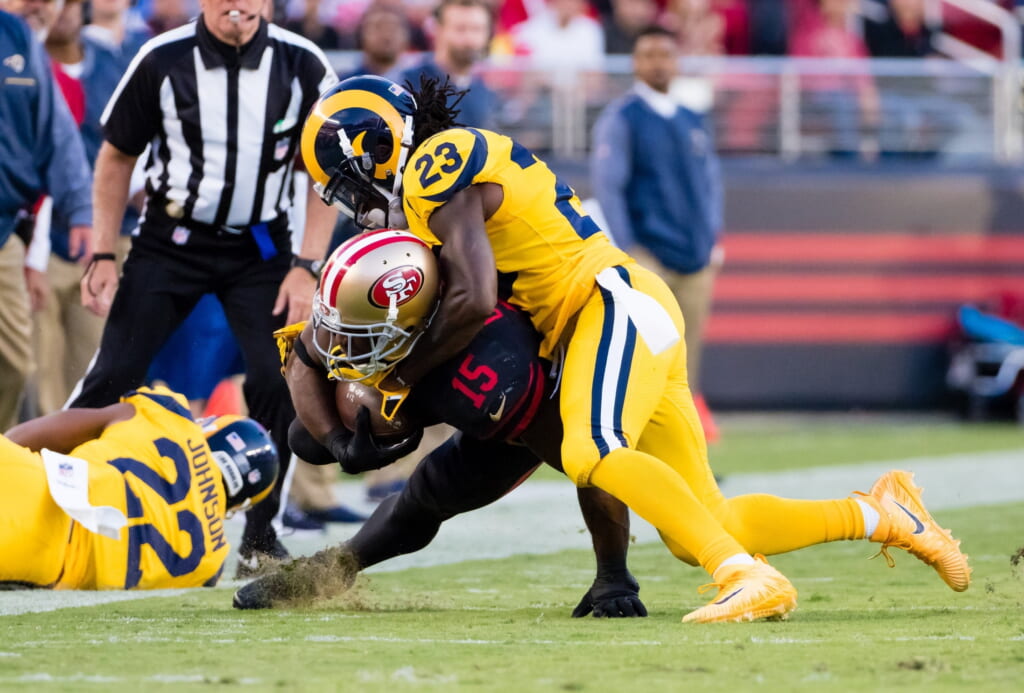 Including a brilliant first-down catch on third-and-18, Garcon continually proved himself to be a reliable target for Brian Hoyer on Thursday night. He caught four passes for 57 yards, including a 30-yarder in the first half alone. And when all was said and done, the former Pro Bowler would account for 142 of Hoyer’s 332 yards on the night. It was capped off by this toe-dragging catch in the second half.

San Francisco paid Garcon a whole lot of cash to join his former Redskins offensive coordinator, Kyle Shanahan, in San Francisco. Thursday’s game was the first in which it looked like Garcon was worth the price.

Gurley appears to be a man on a mission after struggling through an unproductive sophomore season. The former All-American at Georgia entered Week 3 having already scored three touchdowns on the year. He matched that total in the first half alone with scores of three, seven and two yards.

When all was said and done Thursday night, Gurley put up 113 yards and two touchdowns on the ground. He also added five receptions for 36 yards and a touchdown through the air. It really does look like Gurley is back to the player we saw during his rookie season. He can thank both Goff and first-year Rams head coach Sean McVay for this.