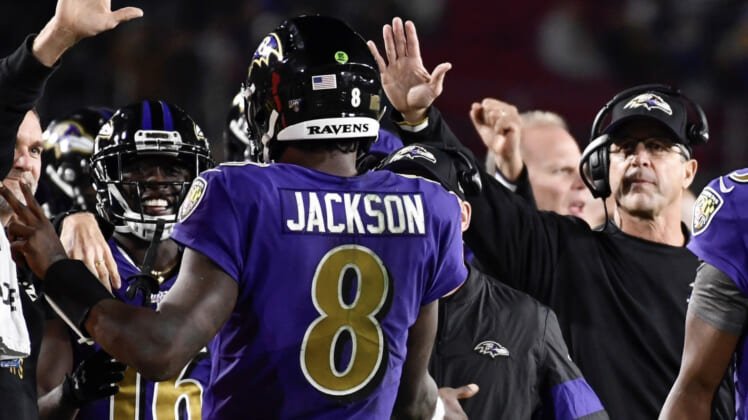 The NFL season is now at its serious stage. Once the holidays hit, contenders attempt to hone their skills for the postseason.

That’s no more true than in Week 13. Multiple games have major playoff and seeding implications, starting with the Bills and Cowboys on Thanksgiving.

Sunday afternoon in Baltimore represents what could be the game of the season with MVP favorite Lamar Jackson and the Ravens hosting the 10-1 San Francisco 49ers.

These are among the seven must-watch games for NFL Week 13.

Sitting at 6-5 on the season following a disheartening loss to the New England Patriots last week, Dallas is just one game ahead of the Philadelphia Eagles in the NFC East. With Philly set to take on a bad Dolphins team, the Cowboys are in near must-win mode.

It’s not going to be easy against a Buffalo Bills squad that’s 8-3 for the first time since the Jim Kelly era. Buffalo absolutely dominated a lackluster Broncos offense in a blowout win last week.

With the Bills two games up for one of the two wild card spots in the AFC and the Cowboys likely battling for first place in their own division, this Turkey Day matchup is a must watch.

Mason Rudolph has been benched. Myles Garrett remains suspended after losing his appeal. It’s in this that Sunday’s rematch of the ugly Week 11 game between Cleveland and Pittsburgh has lost some of its appeal. That’s until we realize these two squads are still heated rivals. It’s going to get chippy in Pittsburgh on Sunday.

The backdrop here is also interesting in that Pittsburgh holds a one game lead over Cleveland for the final wild card spot.

With undrafted rookie free agent Devlin Hodges set to start for the Steelers, they could very well drop this game. In fact, the Steelers are home dogs to Cleveland for the first time in three decades. This one should be a blast.

It’s rather simple for the Rams and struggling quarterback Jared Goff. If Los Angeles were to lose Sunday with the 49ers coming out on top against Baltimore, the team would pretty much be eliminated from playoff contention. What a miserable encore for a Rams team that earned a Super Bowl appearance last season.

Sitting on the other side is one of the top rookies in the game, Cardinals quarterback Kyler Murray. All he’s done is put up nearly 2,000 total yards with 12 touchdowns and one interception over the past seven games.

Arizona will want to pull off the home upset en route to likely sending Los Angeles to a non-playoff winter. It should be a fun post-holiday outing in the desert.

Oakland had a golden opportunity to stay tied for the AFC West lead against what was a three-win Jets team in New Jersey last week. Instead, Jon Gruden and Co. picked that game to put up their worst performance of the season — a 34-3 loss to the Jets.

Now one game behind Kansas City in the division, the Raiders have another opportunity here. With a win they’ll tie up the AFC West heading into December. No one could have envisioned that back in Week 1.

On the other hand, Kansas City can pretty much wrap up the division with a win on Sunday. Patrick Mahomes and Co. have already defeated Oakland this season and are whopping 9.5-point favorites.

One of a few potential playoff matchups on the Week 13 slate, the Texans are attempting rebound from last week’s blowout loss to the Baltimore Ravens. They sit at 7-4 on the season and just one game ahead of two teams in the AFC South.

Can Deshaun Watson and Co. get back on the winning track against the Patriots’ No. 1 scoring offense? That’s a major question.

On the other side sits a future Hall of Fame quarterback in Tom Brady who has struggled big time over the past half-season. That eight-game span has seen him put up just five touchdowns compared to three interceptions. Facing a real test from Baltimore in the race for home-field advantage in the AFC, this is a huge game for Brady and Co.

Yet another potential playoff matchup, these two teams sit atop the NFC Wildcard standings, and there’s not really any competition for the spot. Seattle is four games ahead of multiple teams for the final spot and one game in front of Minnesota for the No. 5 seed.

The interesting backdrop here is that both squads are still very much alive in their division races. By virtue of Green Bay’s blowout loss to San Francisco last week, the Vikings are tied atop the NFC North. Having been the lone team to beat the 49ers this season, Seattle is just one game back in the NFC West.

Needless to say, this is an absolutely huge game. It also pits two of the most-productive quarterbacks in the NFL against one another.

How these two quarterbacks perform will tell us a lot about the outcome of the game. It’s certainly one of the biggest matchups on the Week 13 slate.

Last, but not least. This has an opportunity to be the game of the year. The same thing was said heading into “Sunday Night Football” Week 12 before San Francisco laid a serious butt-whooping on the Packers, 37-8.

Meanwhile, the Baltimore Ravens disposed of the Los Angeles Rams in Southern California. They dominated Jared Goff and Co. en route to a 45-6 victory. That represented the seventh consecutive victory for Lamar Jackson and Co.

The backstory here is real. It pits the MVP favorite against what could be an historically good pass defense.

Talk about strength versus strength. Will Baltimore give Jackson time to pass against the best pass rush in the NFL? If not, will he burn a dominant 49ers defensive front on the ground?

There’s also a whole heck of a lot on the line here. San Francisco remains the No. 1 seed in the NFC at 10-1, but is just one game ahead of the Seahawks. Baltimore is one game behind New England for the top seed in the AFC and has already defeated the defending champs. Talk about a must-watch game in Maryland.