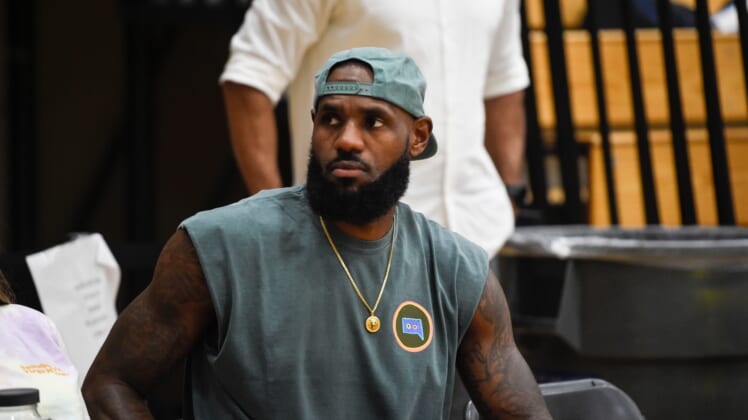 On Friday afternoon, former NBA veteran Jamal Crawford sent social media into a frenzy when he announced a couple of former No. 1 overall picks would be in the building on Saturday for his ‘Crawsover’ Pro-Am, including LeBron James.

The first announcement came by dropping the news that the 2022 NBA Draft’s first overall pick by the Orlando Magic, Paolo Banchero, would be participating in the annual event.

He would then follow that announcement that the second over pick in 2022 NBA draft by the Oklahoma City Thunder, Chet Holmgren, would be in the house on Saturday as well.

After that, he shared that Atlanta Hawks newly acquired guard Dejounte Murray would also be in attendance on Saturday. Then social media went absolutely haywire when the news broke that four-time NBA Champion LeBron James would be returning for the first time in more than 15 years.

James would reply, “Seattle, let’s get it! Been over 15 plus years since I’ve been back and played ball! Well the wait is almost over. The King is BACK!”

The Seattle Seahawks react to LeBron James returning to Seattle.

When news hit that LeBron James will be returning to the Emerald City, the Seattle Seahawks had their own response.

The offer that the Seahawks are referring to came during the 2011 NBA lockout, and the team offered James a contract to play for Seattle, which James confirmed on the ESPN Monday Night Football show with Peyton and Eli Manning.

Pete Carroll would confirm James’ claim that the Seahawks offered him a contract.

“I can’t remember the specifics of that, but you can see why I would, there’s been plenty of evidence,” Carroll told reporters (h/t Seattle Times). “I think we were having fun with it at the time, but I’m sure there were some serious thoughts in my head that it could be a good idea.”

Many have speculated that LeBron could have played tight end because of his height, stature, and athletic ability. Carroll thinks it would have been fun to see what the NBA star could have done in the NFL.

“I don’t know what he couldn’t do,” Carroll continued. “He’s an all-time athlete and competitor. It’s not the same game, it doesn’t mean it necessarily carries over, of course, but it would have been fun to try to find out, I know that.”

Former Seahawks linebacker Bobby Wagner was asked about the possibility of James playing in the NFL and how he would defend himself against it.

“He would’ve been a big target,” Wagner said. “If I got in the red zone, I would have just thrown it up and let him use that 40-something-inch vertical to go catch the ball.”

“I watched that interview. One of the reasons he stopped playing football is because he kept getting hit. Basketball — you don’t get hit in basketball. That’s a nice life over there.”

The Seattle Seahawks on Thursday night would lose to the Chicago Bears 27-11 and will take on the Dallas Cowboys on August 26 at AT&T Stadium at 8 pm EST. As for the Crawover Pro-Am, doors will open at 12:45 am PST at Seattle Pacific University on Saturday.