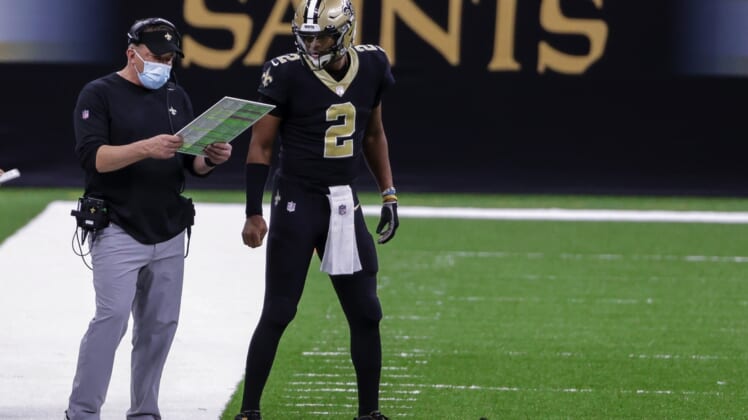 Sean Payton and the New Orleans Saints are in meetings this week evaluating the roster, and the quarterback position remains a hot topic.

There is growing sentiment Drew Brees plans to retire, leaving Payton to plot for a future without his franchise quarterback.

New Orleans re-signed Taysom Hill last spring and picked up Jameis Winston, the former No. 1 pick, after he was released by the Tampa Bay Buccaneers.

“We got great exposure for one year with Jameis Winston,” Payton said Wednesday in an interview with NFL Network. “We had enough time to see what we had with him as a player, as a leader, as an athlete. I really like what we had a chance to see. He was a tremendous leader on this team. That’s hard to do when you come in new, free agency, first year as a backup. That will be an important checkmark for us. A lot of times you want to hold your cards closer to the vest, and he is a free agent. He along with Taysom Hill, who’s in the building. We’ve said it all along — we’re going to develop and coach those guys.”

The Saints are 8-1 over the past two seasons without Brees, who had a hand injury in 2019 and fractured ribs last season. He has been the starting quarterback for the Saints since 2006. An official announcement from Brees on his status for next season is expected in the coming weeks, well before free agency begins in March.

Payton lamented a close call on Brees’ heir apparent in 2017, when the Saints held the No. 11 pick and had been on a stealthy campus visit to scout Patrick Mahomes. After a full day in Lubbock visiting Texas Tech coaches and working out Mahomes, Payton and the smitten Saints’ brass scurried back to the airport in an effort to cover up their affinity for the Red Raiders star.

“We came away from there blown away, impressed,” Payton said. “I know I came away from there saying, ‘That’s the best college quarterback I’ve ever evaluated.’ … There were all the other checks, the things you can’t see on video — his personality is fantastic, he’s one of those guys who was always hanging out in the gym in high school, he comes from an athletic family, he’s got a bright smile. It was all there.”

About 12 minutes before the Saints went on the clock in the first round of the draft, the Kansas City Chiefs traded up to No. 10 in a deal with the Buffalo Bills. Payton cringed, and knew exactly what was coming.

“Andy (Reid) went up to 10. As soon as that trade took place, we know that was for Mahomes,” Payton said. “He’s fun to watch. And certainly tough to defend.”