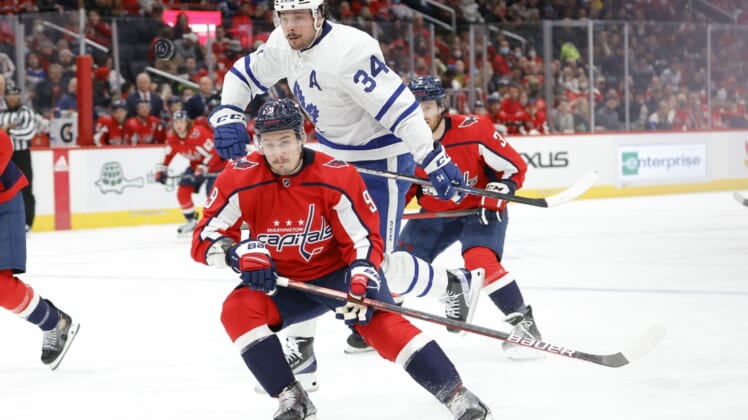 Alex Ovechkin and the Washington Capitals visit Auston Matthews and the Toronto Maple Leafs on Thursday night in a matchup between two of the top snipers in the NHL.

Ovechkin scored his 46th goal of the season Tuesday in Washington’s 9-2 victory over the visiting Philadelphia Flyers. He needs just four more to match Wayne Gretzky and Mike Bossy by reaching the 50-goal mark for the ninth time in his career, most in NHL history.

Matthews failed to add to his league-leading 58 goals Tuesday night in Toronto’s 5-2 home loss to the Buffalo Sabres.

The Maple Leafs dropped three of four games against the Sabres, who will miss the playoffs.

“That’s four games against this team and we’ve been no-shows in all four,” coach Sheldon Keefe said. “It’s hard to pinpoint. It seems like we have one team every year that just for whatever reason you just don’t have your game against them and this has been the team.”

The Maple Leafs (47-20-6, 100 points) are third in the Eastern Conference and have clinched a playoff spot.

“You wish that you didn’t have nights like this,” Keefe said. “We would be a team that’s competing for the Presidents’ Trophy; we would be in that mix. Colorado’s running away with it, but we would certainly be right there with Florida if we don’t have these kinds of nights. Games like this are why we’re still competing for home ice in the first round.”

Toronto is expected to rest some players in its remaining nine games.

“We’re pretty much in a playoff schedule,” Keefe said. “Definitely we want to be mindful of how the group is feeling. We’ve got to make sure that we’re being smart with what we’re doing on the ice.”

The Capitals (41-22-10, 92 points) are eighth in the Eastern Conference and have yet to clinch a playoff berth.

They open a five-game road trip on Thursday on a four-game winning streak.

“We came downtown here to play a game and play hard,” said right winger T.J. Oshie, who scored his first goal in more than a month Tuesday. “It didn’t matter who we were playing against, and that’s very important for us going forward. If guys make mistakes, guys know we have a new standard that we’ve set recently here that we have to live up to each night.”

“The guys did a good job coming out and playing strong in the beginning,” Capitals coach Peter Laviolette said. “We’d love to move up the standings and chase higher. The bigger picture is to continue to try and play well. And so that’s four games in a row where we’ve done the right things and made good decisions through the neutral zone and established an identity in the offensive zone and been pretty tight defensively. That’s really the objective.”

The Maple Leafs defeated the Capitals 5-3 on Feb. 28 at Washington.