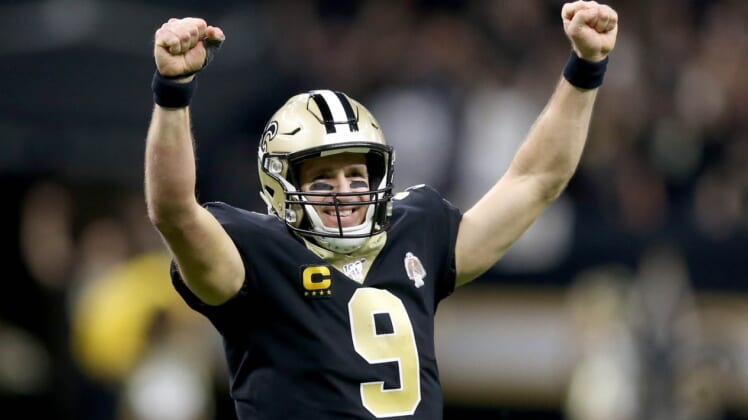 Drew Brees padded his status as an NFL legend, and the New Orleans Saints embarrassed the Indianapolis Colts on “Monday Night Football” in Week 15.

By halftime, the Saints led the Colts by the score of 20-0. Then, in the third quarter, Brees passed Peyton Manning to become the NFL’s all-time leader with 540 touchdown passes, putting the Saints up 27-0.

From there, Brees kept right on cooking and the Saints racked up another score. Meanwhile, the Colts couldn’t find an offensive pulse until garbage time. The end result was a 34-7 victory for the Saints over the Colts.

These are the biggest winners and losers from the Saints’ blowout win at home over the Colts on “Monday Night Football.”

Coming into this game, Drew Brees was three touchdown passes away from breaking Peyton Manning’s all-time touchdown passes record. Any question about whether fans would have to wait another night were quickly brushed aside as Brees went about his business in a surgical manner, shredding the Colts in the process.

Brees nearly had the record just before halftime when Tre’Quan Smith hauled in what would have been 540. Then, Smith was hit with an offensive pass interference penalty that led to New Orleans settling for three points. Fans were furious.

But in the third quarter, they found their joy when Brees found tight end Josh Hill for a five-yard touchdown, and the record was officially his (watch here).

Adding to his legend, Brees completed 29-of-30 passes for 307 yards with four touchdowns and zero interceptions, setting yet another NFL record in the process.

Loser: Jacoby Brissett was a wreck

Prior to this “Monday Night Football” matchup, we wrote that Brissett would need to get hot if the Colts had any chance of hanging with the Saints. Instead, he came out ice cold and never got into any kind of rhythm.

He opened the game by overthrowing receivers on basic passes numerous times. It really didn’t get any better outside of a few impressive throws. Brissett finished the game with 165 yards on 18-of-34 passing as the Colts were knocked out of the playoffs in embarrassing fashion.

With two games left to play in the season, Michael Thomas broke his own franchise record with his 126th reception of the season and fifth of the game. Then, as if to accentuate the point that he’s nowhere near done this season, his next catch was a one-handed gem.

All told, Thomas was targeted by Brees 12 times, and he hauled in 12 passes for 128 yards and a touchdown.

The man’s hands are made of glue, and he’s the surest thing in the NFL right now. Utterly dependable, Thomas is the biggest reason the Saints almost won last weekend against the 49ers. He’s also on the verge of breaking the NFL’s all-time record of 143 receptions, set by Marvin Harrison in 2002.

We get it, Colts. We do. This Saints offense shredded the best defense in the NFL last weekend as Brees roasted the San Francisco 49ers for six total touchdowns in a losing cause.

But looking at the Colts defenders after big Saints plays, it was kind of sad. They were bewildered. They had no answers. They almost didn’t exist.

The Saints converted 27 first downs and averaged 6.7 yards per play on “Monday Night Football.” At this level, it doesn’t matter who you’re doing up against, as a defense that’s embarrassing.

Winner: Saints still alive for the No. 1 seed

With their resounding victory over the Colts on Monday night, the Saints improved to 11-3 on the season and are very much alive for the No. 1 seed in the NFC.

It’s pretty incredible, really, to look at the top of the NFC standings and realize there are four teams with 11-3 records. The Saints joined the Seattle Seahawks, Green Bay Packers and San Francisco 49ers. With two games left, the NFC is still up for grabs, and the run to the finish line will make for some compelling football.

And if the Saints do pull it off and the road to Super Bowl goes through New Orleans, that’s tough business for any other NFC contender.