The Sacramento Kings missed the NBA Playoffs for the 15th consecutive season and the NBA Draft lottery once again didn’t work out in their favor. Holding the No. 9 overall pick, general manager Monte McNair will have a few options in the 2021 NBA Draft.

Everyone knows the Kings’ draft needs. They are thin on the wing, need a long-term answer at center and desperately need anyone capable of defending an opponent. Fortunately, the 2021 NBA Draft class offers some intriguing choices.

It comes as no surprise that one of the worst defensive teams in NBA history might need to consider changing that via the 2021 NBA Draft. For a team that also needs to surround De’Aaron Fox with more outside shooting, opening up the lane for the fastest player in the NBA, Wagner could be an ideal fit.

Michigan’s 6-foot-9 forward profiles as the prototypical 3-and-D player at the next level. He improved his numbers from beyond the arc, hitting 34.3% of his 3-point shots as a sophomore. He was also part of an exclusive club, averaging more than one steal, block and 3-pointer per game.

The Kings desperately need players who they don’t need to teach the fundamentals of defense. Wagner’s length and quickness give him the versatility to match up with multiple positions. But what really stands out, Wagner’s instincts. Fans loved seeing Tyrese Haliburton get deflections and time his steals perfectly, Wagner can do the same.

With the 2021 NBA Draft closing in, there’s now growing buzz connecting Wagner to the Sacramento Kings.

“Three things have consistently come up when discussing what the Kings are thinking with sources around the league. First, that they would love to take a bigger wing/forward. Second, that defense is important to them in this pick. And third, that analytics will play a bigger role here than in other situations league-wide, given Monte McNair’s background and ownership’s emphasis on being data-driven.”

Wagner checks all of those boxes. He’s a wing defender capable of guarding multiple positions and with a decent perimeter shot. Not only does is youth fit the Kings’ timeline with Fox and Haliburton, but he’s one of the most pro-ready players in the draft class. Barring a trade, Wagner seems like the likely pick.

It proved to be a challenging 2020-’21 season for many college athletes, but Jalen Johnson’s brief tenure at Duke didn’t end how anyone expected. A five-star recruit in 2020, Johnson played in just a handful of games before suffering a foot injury. Shortly after his return, the freshman opted out and left the team.

Leaving Duke suddenly isn’t the only concern NBA front offices will have before meeting Johnson. Stadium’s Jeff Goodman reported there were off-court issues between Johnson’s camp and the Blue Devils. He also abruptly left IMG, which adds to the red flags.

There’s a lot to like about a 6-foot-9 forward with outstanding athleticism, length and impressive vision for his position. He can be the modern point forward teams are looking for and would fit nicely in the Kings’ lineup for a team that struggled to create open looks and couldn’t move the ball around consistently. But there are some concerns about his defense and there are concerns about his jumper.

There’s an increasing likelihood that Richaun Holmes doesn’t return next season. So, with center once again becoming a need, it’s a safe bet that one of the Sacramento Kings draft picks goes toward the position. If the franchise wants to swing for upside, Kai Jones is an intriguing target.

A four-star recruit by 247 Sports, Jones has drawn some NBA comparisons to Christian Wood. The 6-foot-10 big man offers outstanding athleticism and is capable of stretching the floor in a fast-paced offense. What really stands out about his game is the defense.

Think of what Bam Adebayo can do in terms of defensive versatility. Jones’ combo of length, athleticism and instincts allow him to switch on multiple positions. Keep in mind, he’s still plenty capable of blocking shots near the rim. Those are all things the Kings badly need.

Moses Moody created a stir on Instagram by suggesting the Kings draft Kai Jones over him, it was an innocent moment. Arkansas’s best player is interested in being drafted by Sacramento and it would be an intriguing fit.

Moody has drawn some comparisons to Mikal Bridges and OG Anunoby, the kinds of players Sacramento desperately needs. The 6-foot-4 wing is a strong defender, showing the instincts, tenacity and athleticism to guard multiple positions. It would make him a nice pairing alongside Tyrese Haliburton, who displayed that same level of defensive awareness this past season.

While Moody isn’t an elite shooter, he’s a player Haliburton and De’Aaron Fox can trust to make his shots. As a freshman, Moody consistently hit from midrange and hit 37.9% of his attempts from beyond the arc. Plus, he’s an above-average rebounder for his size and delivers a team-first approach that will help others around him succeed.

What NBA Draft prospects have the Sacramento Kings interviewed? 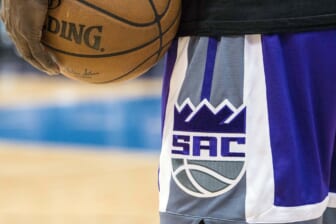 While there remains a real possibility Monte McNair keeps the No. 9 pick this summer, a trade feels increasingly likely. Sacramento’s general manager wasn’t aggressive in his first season at the helm, focused on evaluating the roster and making smaller deals. With this team a year shy of the longest playoff drought in NBA history, a big move might be necessary.

The Philadelphia 76ers are clearly open to trading Ben Simmons, they really don’t have another great alternative. Plenty of teams will be interested, even after Simmons’ woeful showing in the NBA Playoffs. While it would be challenging, this is also exactly the opportunity McNair talked about in press conferences.

Sacramento could package Marvin Bagley, Buddy Hield and the No. 9 overall pick in an offer for Simmons. Hield would provide the 76ers with an outstanding shooter on the outside, spacing the floor and creating options for Joel Embiid. Bagley would get a fresh start and could turn into something for Philadelphia, while the 9th pick could be kept or flipped.

Putting Simmons and Fox on the floor together would hurt the Kings’ outside shooting, creating a need for 3-point shooters. But Sacramento would acquire one of the best defensive players in the NBA and someone who can help facilitate the offense.

If Simmons isn’t an option, the Kings could make a call to the Indiana Pacers. Myles Turner is being floated in NBA trade rumors and he is one of the best defensive centers in the NBA. With Richaun Holmes headed for free agency, Turner would be an upgrade for the Kings.

The Kings are set at guard for years to come. Fox is entering the first year of his max contract and Haliburton proved he pairs nicely with Sacramento’s franchise player. Behind those two, Delon Wright is an excellent player off the bench and filled in nicely whenever one of the starters went down.

Ultimately, the focus for the Kings in the 2021 NBA Draft will be versatile, defensive-minded wings. McNair showed some tendencies in the 2020 NBA Draft that might indicate Wagner could be a target. But no one should be surprised if the Kings trade the No. 9 pick for a player who can make an impact immediately.