The NBA is just like any sport, winning takes a lot of hard work, dedication and in some cases a lot of luck. A team having a wealth of talent on their roster couldn’t hurt either

At the same time, we saw a number of playoff droughts continue as the Mavericks continued a 10-year streak without a win in a playoff series after a loss to the Los Angeles Clippers in the first round. However, that streak was not long enough to crack this list.

Droughts in the NBA playoffs: Longest streaks without a postseason berth

In the Chicago Bulls last playoff appearance, they had a loaded team that featured Jimmy Butler, Rajon Rondo and Dwyane Wade who was playing his only full season away from the Miami Heat. They were expected to be a contender in the Eastern Conference.

However, they had a rough regular season seeing them finish with a 41-41 record and just barely make the playoffs as the eighth seed. After winning the first two games of their first round series against the top-seeded Boston Celtics, they lost the four remaining games losing in six games. Following this season, the Bulls would record three straight seasons with less than 30 wins for the first time since 1999-2002.

The Charlotte Hornets had a chance to make the playoffs this season but were unable to make it out of the NBA Play-In Tournament losing in their first game against the Indiana Pacers.

The last time they made the playoffs was in the 2016 season when they finished 48-34 clinching the sixth seed in the Eastern Conference. This was their best record in a season since the 1999-2000 season when they posted a 49-33 record. It was also the closest the Hornets winning their first division title in franchise as the Miami Heat, their opponent in the postseason, also finished the season with a 48-34 record, winning the division via tiebreaker.

It’s safe to say that the Sacramento Kings have fallen on hard times as a franchise. They are the only team that has not made the playoffs since 2010 going on 15 straight seasons without an appearance in the postseason. In addition, they have also failed to finish a season with a record above .500. The closest the Kings have come to making the playoffs was in 2019 when they finished ninth in the Western Conference but were still nine games behind the eight seeded Los Angeles Clippers.

As previously mentioned, the Charlotte Hornets last made the playoffs in the 2016 seed as the sixth seed where they faced the Miami Heat.

Their last win came in Game 5, beating the Heat 90-88 to take a 3-2 lead in the series. The victory was capped by a Courtney Lee 3-pointer with 25 seconds remaining. Unfortunately, the Hornets would lose the two subsequent contests, and the series in seven games.

The Detroit Pistons were arguably the most dominant team in the Eastern Conference in the 2000s. They made the playoffs in all but one season, appeared in six straight Eastern Conference Finals between 2003 and 2008 and won an NBA Championship in 2004.

It was in the 2008 Conference Finals against the Boston Celtics that the Pistons last won a playoff game. The Celtics were in the first year of the Big Three era led by Paul Pierce, Kevin Garnett and Ray Allen.

The Pistons’ last victory came in game four in which they beat the Celtics 94-75 on their home floor to tie the series 2-2. The Celtics would go on to win the next two games winning the series and eventually win the NBA championship over the Los Angeles Lakers in six games.

Detroit made the postseason three times since then and has been swept in the first round in each appearance. Two times were against a LeBron James-led Cleveland Cavaliers team in 2010 and 2016, while the other occasion saw the Pistons lose to the Milwaukee Bucks in 2019.

After losing the first two games of the series on the road, the Kings fought back winning the next two games to tie the series. Their game four win serves as their most recent in the playoffs as they beat the Spurs 102-84.

Longest drought without a series win in NBA playoffs

The 2004 NBA Playoffs was not only the last time the Minnesota Timberwolves have won a playoff series, it’s the only time they’ve done so in franchise history. This season saw their franchise cornerstone Kevin Garnett win the NBA MVP leading the T-Wolves to a franchise best 58-24 record.

Since then, Minnesota has had more seasons winning less than 20 games (4) than they do season with more than 35 wins (3). The Timberwolves have since made the playoffs once since then in 2018 where they would lose to the Houston Rockets in five.

When comparing the Sacramento Kings of the early 2000s to them today, it is pretty much night and day. Where the King now are trying to make the playoffs for the first time in 15 years, the Kings used to be a perennial playoff team featuring Chris Webber, Vlade Divac, Mike Bibby, Doug Christie and Peja Stojakovic.

Webber was, however, able to play in the playoffs for the Kings helping lead them past the Dallas Mavericks in the five games in the first round. Their playoff run came to an end when they lost to the aforementioned Minnesota Timberwolves in the second round in seven games. 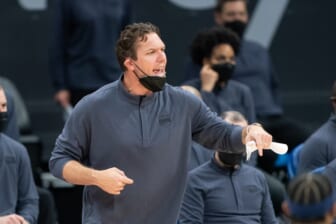 The Charlotte Hornets have not had the most extensive playoff background in their franchise’s history. In 31 seasons in the NBA, they have made the playoffs 10 times making it past the first round just four times. It has been 19 years since the Hornets last made it past the first round when their roster starred Baron Davis in just his third NBA season alongside David Wesley, Jamaal Magloire and Jamal Mashburn.

Charlotte beat the Orlando Magic in the first round 3-1 in the final NBA playoffs that saw the first round contested in a best-of-five series. This was also the second straight season the Hornets won a playoff series the only time it has happened in their franchise’s history. They would be eliminated in the next round by the eventual Eastern Conference champion New Jersey Nets in five games.