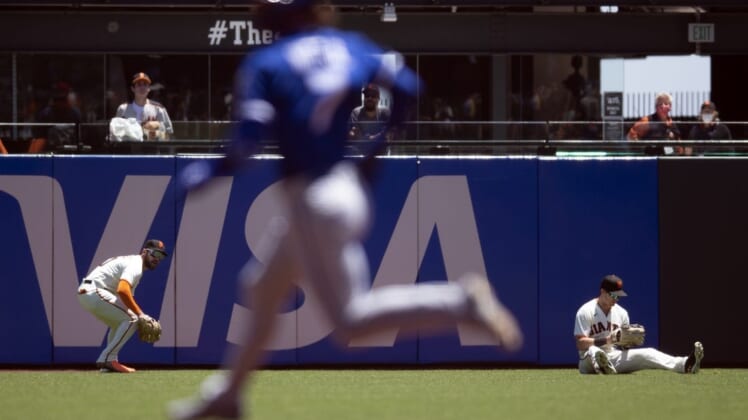 Pinch-hitter Andrew Benintendi doubled and scored the tie-breaking run in the eighth inning and four relievers combined to shut out the San Francisco Giants over the final five innings as the Kansas City Royals avoided a series sweep with a 3-2 road victory Wednesday afternoon.

Closer Scott Barlow pitched out of an eighth-inning jam and cruised through a 1-2-3 ninth for his seventh save, helping the Royals snap a four-game losing streak by winning the finale of the three-game set.

After the Giants had tied the game with a two-run fourth, neither team scored again until Benintendi lashed the third pitch from John Brebbia (3-1) for a double to right field leading off the eighth.

Seeking a second straight series sweep and a sixth consecutive win, the Giants put the potential tying run on base in the bottom of the eighth when Brandon Belt walked. Barlow, who came on one out later, stranded Thairo Estrada in scoring position at second when he struck out Tommy La Stella to end the inning.

Barlow then made short work of the Giants in the ninth, retiring the side in order to save the first career win for rookie Jose Cuas (1-0), who recorded three outs bridging the seventh and eighth innings.

The Royals jumped on Giants opener Sammy Long for two unearned runs in the first after Merrifield led off with a bunt single and Bobby Witt Jr. doubled with one out.

Long got a second out before shortstop Brandon Crawford booted a grounder off the bat of Hunter Dozier, allowing both baserunners to score.

Long went three innings, allowing just the two unearned runs and three hits. He struck out two and did not walk a batter.

Royals starter Jonathan Heasley took a shutout into the fourth, but immediately served up Belt’s fifth home run of the season.

Estrada followed with a walk and Crawford added a single, after which flyballs by La Stella and Curt Casali each advanced Estrada a base, tying the score.

Heasley was pulled after four innings, charged with two runs on five hits. He walked two and struck out four.

The Royals won despite getting just four hits. Witt had two of them.

La Stella went 2-for-4 for the Giants, who had seven hits.