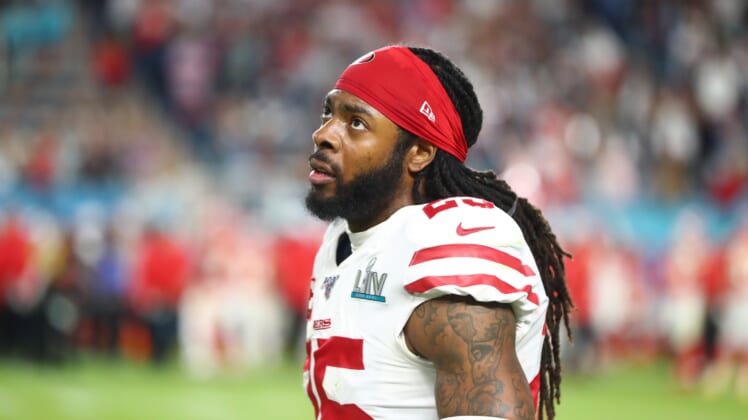 Free-agent cornerback Richard Sherman has been arrested and held with bail denied at the Seattle Correctional Facility for an alleged burglary and domestic violence incident.

NBC Sports Northwest’s Joe Fann provided the initial details on Sherman’s arrest, indicating that the 33-year-old has been booked on felony charges.

The NFLPA released a statement after news of Sherman’s arrest surfaced:

ESPN’s Adam Schefter later reported that no one at the residence Sherman was allegedly trying to break into was injured, and added that Sherman is also being linked to a hit-and-run. Schefter also tweeted a statement of support from Sherman’s wife:

Authorities in Redmond later held a press conference, noting that there was no reported violence between Sherman and those who alerted authorities.

Almost immediately after that press conference, 911 tapes of the incident were released. Said tapes displayed a combative operator speaking with Sherman’s wife.

Sherman was a fifth-round pick in the 2011 NFL Draft out of Stanford and spent his first seven seasons with the Seattle Seahawks before playing the last three years for the San Francisco 49ers.

A five-time Pro Bowler and three-time first-team All Pro, Sherman was a prominent fixture in the Legion of Boom secondary that helped the Seahawks to a Super Bowl XLVIII victory over the Peyton Manning-led Denver Broncos.

After an injury-plagued 2020 campaign, the expectation was for Sherman to sign with a team just prior to or during NFL training camps, which open later this month. Now, it looks like Sherman’s career could be in jeopardy if he’s indeed found of wrongdoing in his alleged domestic violence situation.

It’s unlikely that this legal situation will be resolved or sorted out quickly, and even if Sherman is permitted to play going forward, unless he’s fully exonerated, he’s looking at a potential lengthy suspension.