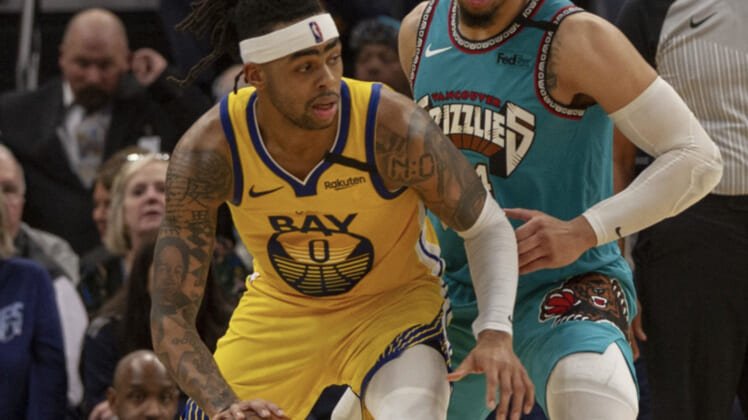 Despite their status as the worst team in the NBA, the Golden State Warriors continue to push back against the idea of trading All-Star guard D’Angelo Russell.

Golden State wants to see how the recently-acquired guard works with Stephen Curry once the two-time MVP returns from injury.

That has not stopped the Minnesota Timberwolves from continuing to pursue a trade for Russell after they missed out on him in free agency this past July.

According to Shams Charania of The Athletic, Minnesota is intensifying its pursuit of Russell ahead of next month’s NBA trade deadline.

“New team president Gersson Rosas and the rest of his front office have been actively pursuing deals on a number of fronts to try to remake the roster to better fit their vision for the team moving forward, league sources told The Athletic,” Charania reported. “That includes intensifying their pursuit of Golden State Warriors guard D’Angelo Russell. Discussions have yielded no traction to this point, league sources said. So far, Golden State has been inclined to keep Russell.”

Minnesota just dealt away starting point guard Jeff Teague in a deal with the Atlanta Hawks earlier on Thursday. The team is now looking for ball-dominant guards to replace him. Russell would be an obvious fit and is considered best buds with star Wolves big man Karl-Anthony Towns.

Any move to acquire the talented 23-year-old Russell would require a major bounty in return. Charania mentions three-and-d wing Robert Covington. Though, Golden State would also likely demand at least one first-round pick as part of the package.

Russell is averaging 23.3 points and 6.0 assists while shooting at a 36% clip from distance for the Warriors this season.