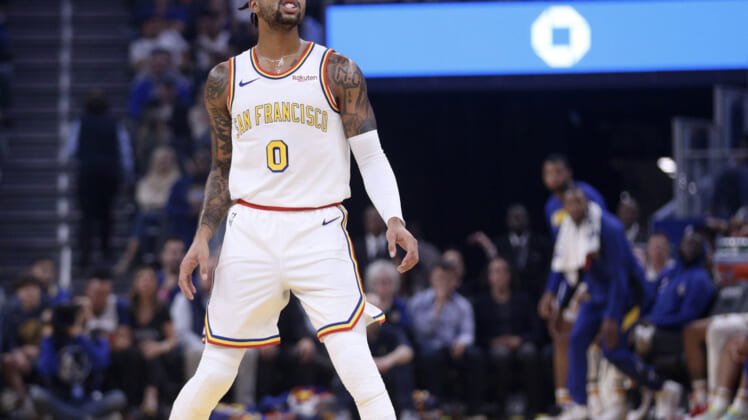 The Golden State Warriors made it clear that they planned on D’Angelo Russell being a long-term component for the team when they acquired him in the Kevin Durant sign-and-trade back in July.

It’s not yet known whether things have changes in the months since. What we do know is that the five-time defending Western Conference champs are already in the midst of a lost season.

Following Wednesday night’s blowout loss to the Houston Rockets, Golden State stands at 2-6 on the season. Kevin Durant is in Brooklyn. Klay Thompson might be out for the season with a torn ACL. Meanwhile, Stephen Curry is out three months with a broken wrist. Both Draymond Green and Kevon Looney are also sidelined.

Now pretty much relying on a G-League squad, there’s a chance Golden State looks to flip Russell for future assets. According to ESPN’s Brian Windhorst, that could net the team a lot in return.

“If the Warriors decide to investigate the market, some league executives believe it’s not unreasonable to think the Warriors could get another first-round pick plus a quality role player for Russell, especially if they’re able to construct a deal where they take back salary,” Windhorst reported.

An All-Star with the Brooklyn Nets last season, Russell himself has missed three games with an ankle injury. He’s averaging 19.0 points and 6.4 assists on just 39% shooting from the field across five outings with the Warriors this season.

Russell’s contract is an asset for the Warriors. It’s highly unlikely they’ll move him for anything less than Windhorst mentions. General manager Bob Myers is thinking long-term.

Curry and Thompson will be back next season. Draymond Green just re-signed on a below-market deal. The long-term plan is for Golden State to target another star player to team up with Curry and Thompson. Giannis Antetokounmpo has been bandied about in the past.

The short of it is this. These Warriors are more than willing to treat 2019-20 as a lost season.

It could enable them to acquire a top pick in the 2020 NBA Draft. Couple that with Russell’s contract or the pieces coming to Golden State in a potential deal, and could enable the team to add that third star.

The likeliest scenario here is that Golden State keeps Russell for the remainder of the season and sees how he coexists with Curry once the two-time MVP returns. The team could then move him ahead of June’s draft if it doesn’t see a long-term fit.