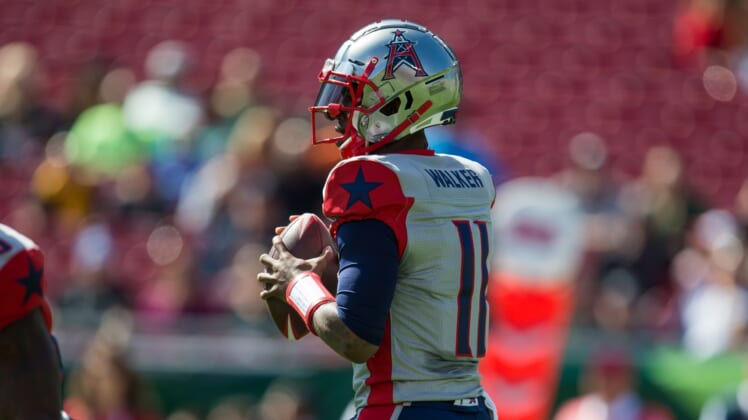 The Carolina Panthers are reportedly signing quarterback P.J. Walker, the XFL’s biggest star who led the Houston Roughnecks to an undefeated season.

Walker drew interest from multiple NFL teams, including the Seattle Seahawks and Denver Broncos, but chose to reunite with Matt Rhule in Carolina.

Rhule served as Walker’s head coach at Temple (2013-’16), where the coach-quarterback duo turned around a program that was a perennial loser before their arrival, When Rhule and Walker hit their stride, Temple  racked up consecutive 10-win seasons.

He began his NFL career with the Indianapolis Colts, spending his first two seasons on the practice squad and learning from Andrew Luck and Jacoby Brissett. Following the 2018 season, he joined the XFL for an opportunity to prove himself as a starting quarterback.

Walker drew interest from Pittsburgh Steelers before the XFL season started, but the XFL blocked them from signing him due to league rules. He elevated his stock even further once the season began, demonstrating the special dual-threat ability that makes him an NFL-caliber quarterback.

The Seahawks sent scouts to watch P.J. Walker in his final XFL game on March 7. He delivered another strong performance with attentive eyes on him, completing 27-of-38 attempts for 351 yards and three touchdowns. The 25-year-old carried Houston to a 5-0 record, the only undefeated team in the XFL, while leading the league in passing yards (1,338), touchdowns (15) and completions (119).

Walker will compete Kyle Allen and Will Grier in training camp and the preseason for a chance to backup Teddy Bridgewater. Given Walker’s relationship with Rhule, he should have a great shot at landing the job.