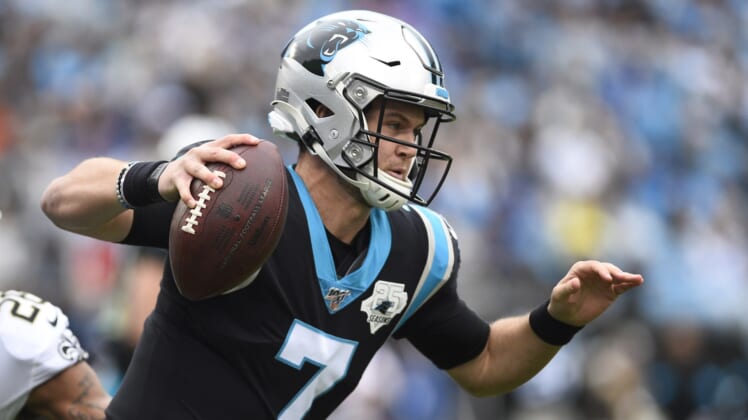 The Carolina Panthers are reportedly trading quarterback Kyle Allen to the Washington Redskins for a fifth-round pick, per NFL Network’s Ian Rapoport.

The trade, first reported by NFL.com’s Mike Garafolo, comes just hours after the Panthers signed XFL star quarterback P.J. Walker. The 25-year-old quarterback lit up the XFL with the Houston Roughnecks and will be favored to become Carolina’s No. 2 quarterback behind Teddy Bridgewater. The move also reunites him with head coach Matt Rhule.

The Panthers signed Allen to a one-year extension on March 10. He started 12 games in 2019, under head coach Ron Rivera, filling in after Cam Newton’s season-ending ankle surgery. During his action, Allen completed 2% of his passes with 3,322 passing yards and a 17-16 TD-INT ratio.

While Walker reunites with Rhule in Carolina, Allen will now rejoin Rivera with the Redskins. An undrafted free agent out of the 2018 NFL Draft, the 24-year-old quarterback spent the first two seasons of his NFL career with Rivera.

Allen is expected to serve as the backup to Dwyane Haskins next season. This move likely takes the team out of consideration to pursue Cam Newton or Jameis Winston. The Redskins are also unlikely to draft a quarterback with the No. 2 overall pick and instead might take Chase Young as the latest mock drafts demonstrate.