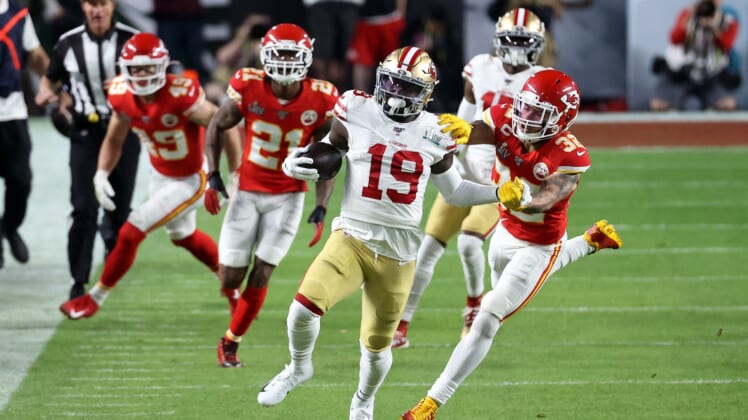 Ian Rapoport of NFL Media reported Thursday that Samuel broke his foot Tuesday during a throwing session with teammates in Nashville. He’s having surgery on the foot Thursday, and the injury is reportedly a Jones fracture.

The good news? Samuel is expected to recover in time to hit the field “early in the season,” per Rapoport.

Star on the rise, 49ers receiver Deebo Samuel put up big stats as a rookie

The 49ers selected Samuel early in the second round during the 2019 NFL Draft. The former South Carolina star surged as a rookie last season, becoming a key playmaker during the team’s Super Bowl run.

As a rookie, Samuel put up big stats: He caught 57 passes for 802 yards (14.1 yards per catch) and three touchdowns. In particular, Samuel’s ability to make plays after the catch electrified fans, and the 49ers offense.

Samuel is also dangerous as a runner. He gained 159 yards and three touchdowns on 14 attempts during the regular season. Then, during the title game, Samuel made history with the longest run by a receiver in Super Bowl history.