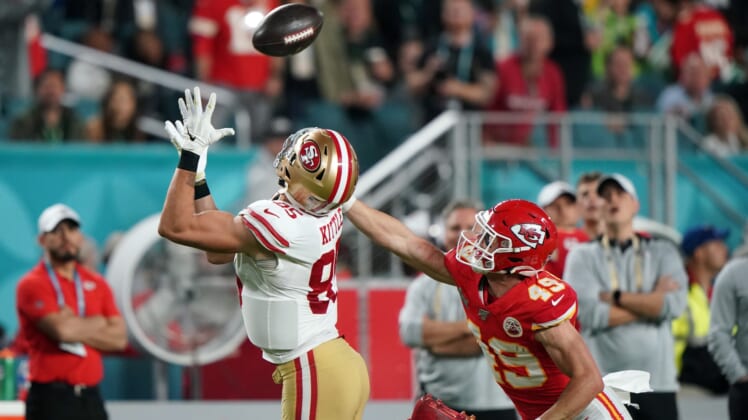 “I talked to Kittle’s agent, Jack Bechta, yesterday,” Silver told Siciliano. “He said progress has been minimal, and later reinforced that by texting me an inchworm emoji to underscore that fact. It’s not just money. There is structure, and how much money a player like George Kittle could get upfront, how much would actually be guaranteed.

“And at the heart of all this has been somewhat of a philosophical divide between the 49ers, who say, ‘Listen, we want to pay you more than any tight end ever because you’re the greatest tight end,’ and Kittle’s camp, which is saying, ‘Don’t view me as a tight end. I was just voted the seventh-best player in football at any position.'”

How much is George Kittle worth to the 49ers?

It’s no secret that Kittle is the engine that drives San Francisco’s offense.

There have been reports that Kittle could be seeking as much as $18-20 million per season — paying him as much as a top receiver in the NFL. The highest-paid tight end in the league on a multi-year contract now is Austin Hooper, who averages $10.5 million per year with the Cleveland Browns.

In a year that has been defined by the COVID-19 pandemic, the NFL is expected to see its salary cap drop significantly in 2021 and perhaps beyond. That is making contract negotiations difficult, to be sure. However, as we saw with Joey Bosa and the San Diego Chargers recently, it’s not impossible to engineer a record-breaking deal.