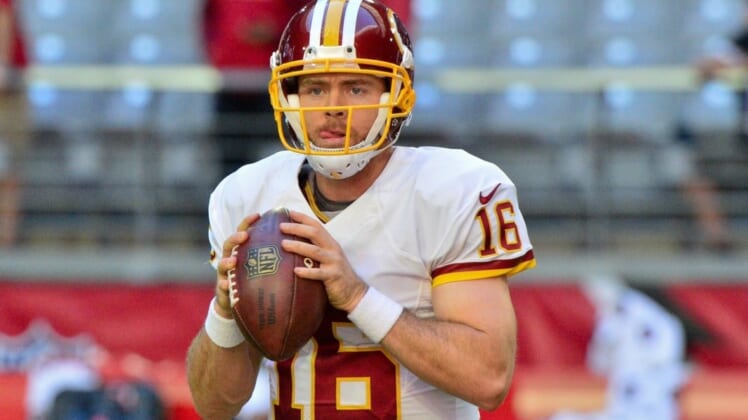 The Washington Redskins might very well be forced to go quarterback during the early stages of this week’s NFL Draft.

Starter Alex Smith’s future is up in the air after he suffered a potential career-ending leg injury last November. Mere weeks later, veteran Colt McCoy joined Smith on the bench with a fractured right fibula.

Now, according to the reports, McCoy remains sidelined as the team starts its offseason program this week.

“McCoy is not in Ashburn as the Redskins currently work through phase one of offseason workouts,” JP Finlay of NBC Sports Washington reported Tuesday. “Instead, per doctor’s orders the quarterback is back in Texas recovering from another procedure on his leg, according to a source with knowledge of the situation.”

McCoy is expected to compete with the recently acquired Case Keenum for Washington’s starting job this coming season. It remains to be seen just how long the veteran will be sidelined.

According to Finlay, McCoy’s latest issue stems from him and the Redskins trying to rush the quarterback back on to the field last season. While it never came to fruition, it has obviously impacted McCoy long term.

A third-round pick of the Cleveland Browns back in 2010, McCoy has started 27 games in nine NFL seasons.