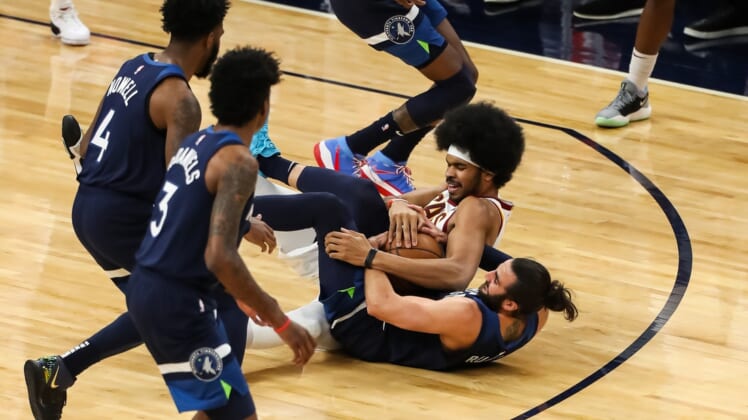 Malik Beasley and rookie Anthony Edwards scored 23 points apiece to propel the Minnesota Timberwolves to a 109-104 victory over the Cleveland Cavaliers on Sunday in Minneapolis.

Beasley and Edwards combined to make 18 of 32 shots from the floor and D’Angelo Russell added 19 points for the Timberwolves, who posted just their third win in their last 17 games.

Jaylen Nowell had a career-high 13 points off the bench, marking his third straight double-digit scoring performance.

Minnesota will bid to record consecutive victories for the first time since winning its first two contests of the season when it visits Cleveland on Monday night.

Andre Drummond collected 25 points and 22 rebounds and Darius Garland had 17 points for the Cavaliers, who went 4 of 16 from 3-point range en route to losing for the fourth time in their last five games. Cleveland’s road woes continued to boot, as it fell to 3-7 away from home.

Sexton’s jumper brought Cleveland within two at 92-90 before Russell sparked Minnesota’s 15-5 run. Russell drained a 3-pointer and set up Beasley’s jumper before converting from beyond the arc on back-to-back possessions.

Garland scored seven points during the Cavaliers’ 9-0 run, including a 3-pointer to trim the Timberwolves’ lead to 107-104 with 8.4 seconds left. Ricky Rubio, however, calmly sank a pair of free throws to seal the win.

Drummond’s layup gave Cleveland a 59-47 lead with 1:41 left in the second quarter before Russell and Beasley connected from deep to power a late 8-2 surge by Minnesota. The Timberwolves didn’t let up in the third, with Edwards scoring 13 points in the quarter to help his team claim an 88-86 lead.

Drummond got off to a fast start by making four of his five shots for 10 points to stake Cleveland to a 35-30 lead after the first quarter. The point total marked a season high in the opening frame for the Cavaliers.