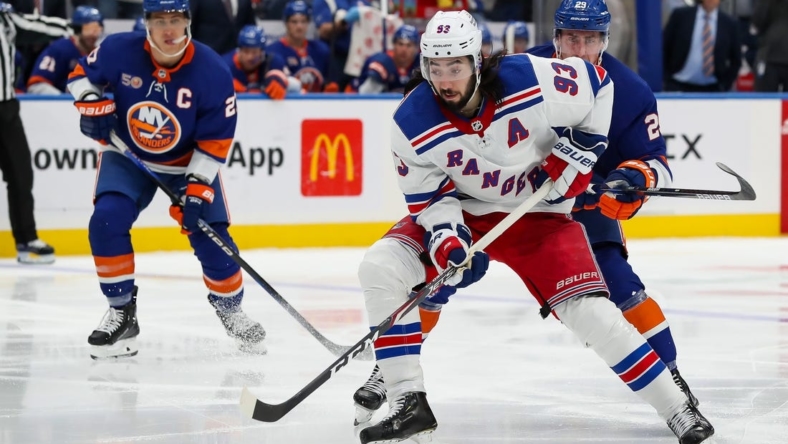 The New York Rangers continue their road trip Saturday with a visit to Dallas to take on the host Stars for their only trip to the Lone Star State.

Mired in a four-game losing streak, the Rangers are in search of their first win since Oct. 17 and most recently dropped their first game of a three-game road trip Wednesday 3-0 against the cross-town New York Islanders.

Rangers captain Jacob Trouba insisted the team will be able to right the ship.

“We’re confident in the group we have here,” said Trouba, who doesn’t have a goal but has three assists in eight games. “We know we can score goals. We’re getting opportunities, they’re just not going in. It is what it is. All we can do is keep working and eventually things are going to turn for us.”

The Rangers put pressure on the Islanders on Wednesday, throwing 41 pucks on goal but standout goalie Ilya Sorokin was up to the task in the shutout. Finding the back of the net has been an ongoing issue as the Rangers have managed just five goals over their four-game skid.

After a torrid start to the season, Rangers center Mika Zibanejad has now gone without a point in four straight games despite putting 18 shots on goal in that time.

Rangers head coach Gerard Gallant has a patient outlook despite the recent struggles.

“I was more concerned about the three games prior to last night,” Gallant said. “I thought we played hard last night — got a point against a real good hockey team — and tonight I thought we played a good, solid game for three periods. I like the way we’re playing. If we continue to play (like that), we’ll win.

Rangers forward Julien Gauthier made his season debut in place of Vitali Kravtsov who is day-to-day with an upper-body injury.

The Stars have enjoyed a strong start to their season and are coming off a 2-0 victory over the visiting Washington Capitals on Thursday. Young goalie Jake Oettinger turned aside all 27 shots he faced against the Capitals and head coach Peter DeBoer had high praise for the former first-round draft pick.

“I think we knew that we had a starting goalie, but until you come out and do it every night, you always wonder if it’s real,” Deboer said. “But it’s real. He’s the real deal. It’s such a luxury to have a guy like that because he makes hard saves look easy.”

After starting the season with three consecutive wins, the Stars dropped three games over a four-game stretch prior to knocking off the Capitals.

Following Friday’s clash with the Rangers, the Stars will play six of their next eight games on the road while the Rangers will finish their three-game road trip Saturday when they take on the Arizona Coyotes.

Friday marks the lone contest between the Stars and Rangers at Dallas this season.