Rangers inform Henrik Lundqvist they will not carry three goalies next season, unlikely to return 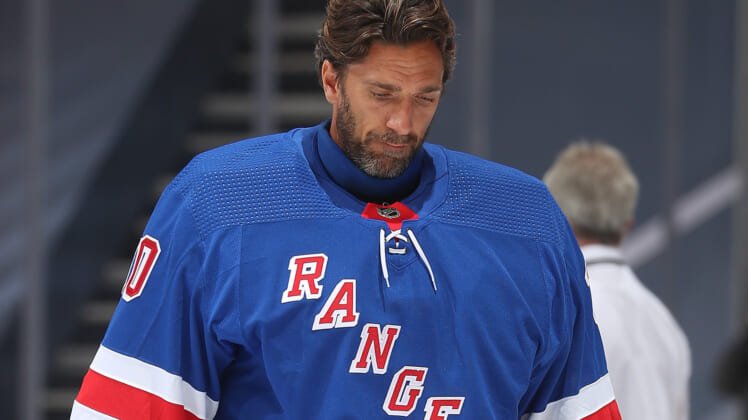 TORONTO, ONTARIO – AUGUST 04: of the Carolina Hurricanes of the New York Rangers in Game Three of the Eastern Conference Qualification Round prior to the prior to the 2020 NHL Stanley Cup Playoffs at Scotiabank Arena on August 04, 2020 in Toronto, Ontario. (Photo by Chase Agnello-Dean/NHLI via Getty Images)

Rangers President, John Davidson conducted his end of the year press conference and dropped a big piece of news. Henrik Lundqvist who has returned home to Sweden may not be returning to the Rangers next season.

Henrik Lundqvist may not return to the Rangers

“I had a good chat with him when we got off the plane from Toronto. It was a discussion we had, we’ll continue the dialogue,” JD said after losing to Carolina.”His representative, Donnie Meehan is a good man. We will talk and see where we go. We made it clear that we aren’t carrying three goalies next year.”

That is a big admission by Davidson and one needs to take that information into the grand scheme of this season. The facts are that the Rangers are very high on their two young goalies, and Lundqvist’s game has certainly taken a step back.

“We have two very young goalies and one goalie that is a future Hall of Famer,” Davidson explained. “You have to have compassion and do things the right way and we will get to it and get to it the right way,” he concluded.

The former Rangers goalie also discussed how “father time” catches up with everyone. So what happens next? JD would not outright say it but the end of Lundqvist’s tenure on Broadway appears to be at an end.

Are you feeling good about winning the lottery Rangers fans? Gear up at Fanatics today.

Here’s what I know, the SHL season will start before the NHL’s due to the Pandemic. During the pause, Lundqvist spent a lot of time in Sweden with his brother Joel at Frolunda’s training facility. Sources based in Sweden told me that Henrik Lundqvist may very well retire and join his brother for one season with Frolunda. After that, he could make an NHL comeback for the Cup with a contender at 40.

I first wrote about this on Wednesday morning. Surprisingly, and giving further credence to what I found out, Larry Brooks wrote up the exact same scenario that afternoon. The only real difference being that he did not mention Hank’s plan to make an NHL comeback at 40.

A Lundqvist retirement will be a final gift to a franchise he’s given so much to. Should he do so, the Rangers will regain the full $8.5 million. Don’t get it wrong, Henrik wanted to finish his contract here, but the fallout from the pandemic may have changed his plans.

I just launched The Daily Goal Horn to cover all the actions, news, and rumors from the NHL. Please give us a try and check out our latest offering.