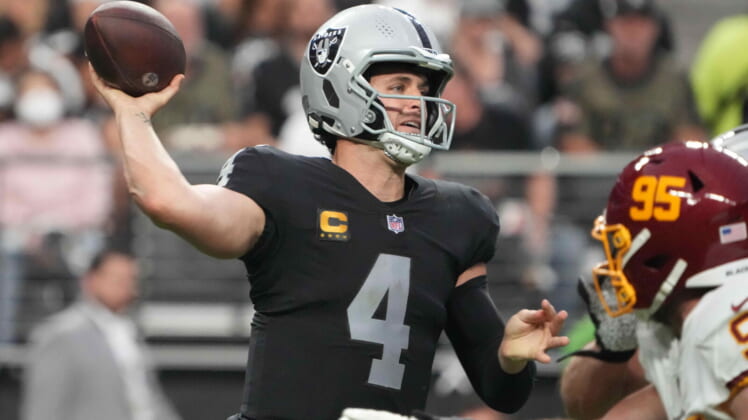 Las Vegas Raiders quarterback Derek Carr has been a lightning rod for fans during his eight years as the starting quarterback for the team. 2021 has been no different. Yet, with another second-half season stumble, the mood of Raider Nation may be changing about their marquee signal-caller, a recent Raiders poll revealed.

The Twitter Raiders poll, posted by influencer “AFL Godfather” (@nflmaverick) shows that most fans don’t want to see Derek Carr benched. Despite that, the gap between those who feel he should be has narrowed considerably.

Those fans who have disliked Carr and not approved of his performance have been a small minority through the years. But, after the events of the past few years and consistent late-season disappointments, this season seems different and even staunch Carr supporters and Raider Nation lifers are starting to question whether it’s time for the team and QB to move on.

Over the past several weeks, interim head coach Rich Bisaccia has raised eyebrows by repeatedly asserting that winning isn’t the only thing (I paraphrase). At the team’s Wednesday press conference, Carr was asked about these statements and how it conflicted with GM Mike Mayock’s early-season assertion that the team had to make the playoffs.

“…I also believe the urgency to win, I feel that, and I feel that on everybody’s heart,” Carr said. “I’ve always felt that. That’s all I’ve cared about, is wanting to win, and win for this team.”

While there was no follow-up question to his assertion about wanting to win, just last Sunday, running back Josh Jacobs, when addressing the team’s consistently slow and sluggish starts on offense, said the team doesn’t always have a sense of urgency. The implication with that statement was the offense has not been on the same page and urgency to win isn’t always there. That’s a direct indictment against your veteran quarterback — there is no way to say it isn’t.

While the Raiders poll didn’t ask about these conflicting messages about winning, many view Derek Carr as an example of a player who’s always defended using individual accomplishments while compiling a 53-69 record as a starter.

While it’s not easy to ascertain the intricacies of the mood of a fan base as diverse and passionate as Raider Nation, the online Raiders poll does reveal, and in my view, people have had enough excuses. Personal accomplishments don’t matter over team goals and aspirations.

One insider, who has been a supporter of Carr over the years, told me this.

“The constant is horrific lows undermine (with Carr) ultra highs,” this Raiders insider told me. “The excuses of the lack of total team perfection should not be the enemy of the good opportunities that he was given in these eight seasons.”

Having covered the Raiders for 4+ years now, I can tell you the overall mood around Carr has significantly changed over the past five or six weeks. While there have always been irrational “haters” of the QB, I’m getting more and more private messages from season ticket holders, lifelong fans, and huge Derek Carr supporters, all asking if maybe it’s time for the two sides to move on amicably. Many will minimize that and blame it on the ups and downs of another disappointing season, but something’s different this time.

These are not fans who dislike Derek Carr. They’re the opposite. They don’t want to publicly slam Carr as they like him. But the losing, lack of progress, and general sense things won’t change after eight seasons has finally opened their eyes a change may be on the horizon.

If the Raiders poll is any indication, the tide has turned and with a contract extension decision looming for owner Mark Davis this offseason, tough choices will have to be made at GM, head coach and most likely, quarterback.