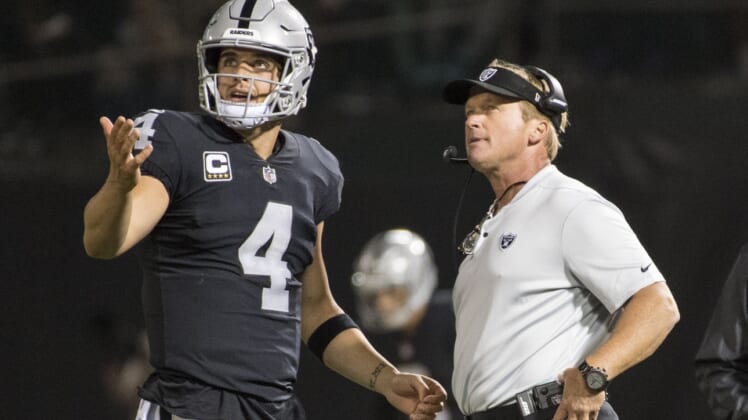 The football gods smiled upon us all with a gift of the Oakland Raiders as the featured team on HBO’s “Hard Knocks” this summer.

With an abundance of juicy subplots to sink our teeth into, there will be no shortage of drama when the series debuts on Aug. 6. With that in mind, we’re looking ahead to the storylines that figure to dominate the 14th edition of Hard Knocks.

As a first-round rookie last season, Kolton Miller was among the worst offensive tackles in the NFL. When the Raiders signed Trent Brown to a record-breaking contract this offseason, it was widely assumed he’d slide into the left tackle spot. Jon Gruden has different ideas, as Miller will attempt to protect Derek Carr’s blind side while Brown mans the right tackle spot.

Given how much Miller struggled last year, it’s going to be fascinating to see how much patience Gruden has (we’re guessing not much) if he continues to disappoint this summer in training camp. Nobody should be surprised if Brown ends up as the starting left tackle once Week 1 comes around.

The Raiders signed two of the baddest dudes in the NFL this offseason, and that’s not a compliment. Vontaze Burfict has racked up an incredible laundry list of fines and suspensions over the years for his blatantly dirty play. Meanwhile, Richie Incognito is best known for being a bully, going into rages in public, and other, more troubling off-field issues.

Putting the two of these guys onto the same field during the dog days of summer seems like a risky play. Burfict has a long history with new teammate Antonio Brown, whom he has seemingly intentionally concussed in the past. And nobody should be surprised if Burfict and Incognito end up going mano-y-mano at some point in the heat of the moment. No doubt, the “Hard Knocks” camera crew will be paying close attention to everything they do.

The Raiders put a huge target on the back of former Clemson star Clelin Ferrell by selecting him fourth overall during the 2019 NFL Draft. He’s a player that pretty much everyone who covers the league had pegged as a late first-round selection. So, right out of the gate, he has an uphill climb to prove he’s worthy of his draft slot.

Given Oakland’s offensive line issues on the edge, there’s a chance Ferrell will thrive during training camp practices. Where he could struggle is on the field during preseason games going against the likes of Andrew Whitworth, David Bakhtiari and Duane Brown. Chances are, this rookie is going to take his lumps.

Can undrafted ‘Last Chance U’ star make the squad?

Ronald Ollie is a name you may recognize. He starred in Netflix’s “Last Chance U” at East Mississippi Community College, turning his success there into a scholarship at FCS Nicholls State. Though Ollie went undrafted this past spring, he’s now with the Raiders and will be attempting to make the cut this summer.

Ollie, a defensive tackle, has the size (6-foot-2, 292 pounds) and athleticism (4.92-second 40 and 35-inch vertical) to potentially make an impact on a defense that needs help inside. He struggled with academics as a featured player on “Last Chance U.” It will be interesting to see if he can stay on top of what figures to be the thickest playbook of his career in Oakland this summer.

It seems like eons ago that Derek Carr signed what was at the time an NFL-record contract extension. He’s struggled to get back to form ever since suffering a broken leg near the end of the 2016 season.

Last season, there was palpable tension between Carr and Gruden on the sidelines. And while Carr completed a high percentage of his passes (68.9) he struggled to make an impact with his arm, garnering the 21st-ranked grade out of qualifying starters by Pro Football Focus. With that in mind, it wasn’t all that surprising that the Raiders weren’t hiding their interest in the top rookie quarterbacks this past spring.

Needless to say, Carr must be sharp this summer and throughout the 2019 season to avoid being a former Raiders quarterback.

Former NFL Network star Mike Mayock is now the personnel head in Oakland, and you can bet HBO is going to be focused on him quite a bit this summer. Will he and Gruden (rumored to be the real GM) clash when it’s time to make cuts? How will Mayock handle letting players go?

It’s going to be fascinating to get an inside look into how the Raiders handle internal issues. This dynamic is especially juicy, because the team was so fiercely determined to keep any leaks from spreading ahead of the draft — going as far as sending most of their scouts home days ahead of the annual event.

Can Paul Guenther turn the defense around?

When Gruden was hired, he hired Paul Guenther to fix what was a bottom-half defense in 2017, but things didn’t go according to plan. The Raiders featured one of the most embarrassingly inept defenses in the NFL last year. Oakland finished the season ranked 26th in total defense and dead last in scoring defense, allowing 29.2 points per game.

This past offseason, Oakland aggressively attacked this from a personnel perspective. The Raiders signed safety Lamarcus Joyner to a lucrative contract, then drafted Ferrell, safety Johnathan Abram, Trayvon Mullen and defensive end Maxx Crosby in the first four rounds. Now it’s going to be up to Guenther and his assistants to turn this thing around.

Will Antonio Brown be trouble, or a star?

Despite his abundant talent and otherworldly work ethic, the one word most associate with Antonio Brown these days is “drama.” His tumultuous exit from Pittsburgh, and the protracted feud he spearheaded between himself and former teammate JuJu Smith-Schuster, are the big storylines surrounding the superstar receiver.

Now with a chance for a new start with the Raiders, can Brown shrug off the perception that he’s the biggest diva in the NFL? Will he be drama-free this summer and get back to simply destroying the ego of all who would attempt to cover him in the open field? Can he bury the hatchet with Burfict? These are questions that will define his tenure in Oakland.

Pressure mounting for Jon Gruden to deliver a winner

Sure, it’s only been one year. Yet Gruden’s four-win first season back at the helm of the Raiders organization was undeniably embarrassing. It was certainly not what owner Mark Davis had in mind when he inked Gruden to a 10-year, $100 million deal.

The Raiders have been extremely aggressive acquiring expensive talent to give Gruden the best chance to succeed. What’s unknown at this time is whether his old-school approach has any merit in a new-school NFL (minus Bill Belichick, of course). Raiders fans are skeptical, and there is already a large number who are pining for the end of the Gruden era.

Building on the idea that Gruden and Mayock are under immense pressure to succeed this year, the Raiders are trying to sell tickets to their brand new stadium, set to open ahead of the 2020 NFL season in Las Vegas.

Already, the Raiders have reduced the cost of some PSLs for the new stadium. Another bad season won’t be good for business. Needless to say, the Raiders have a lot riding on the coming season, which will amplify tensions in training camp.