The Pro Bowl is an increasingly flawed voting process, especially as we figure out Pro Bowl 2015 voting. Already a popularity contest at the most obscure positions, changes in voting procedure have turned it less into a measure of merit and more a determinant of relative market strength. Regardless, we strive our best to create a good ballot—whether that means the best players or our hometown players. Part of an ongoing series to guide your Pro Bowl ballot, we continue with wide receivers and tight ends. For quarterbacks and running backs, click here. 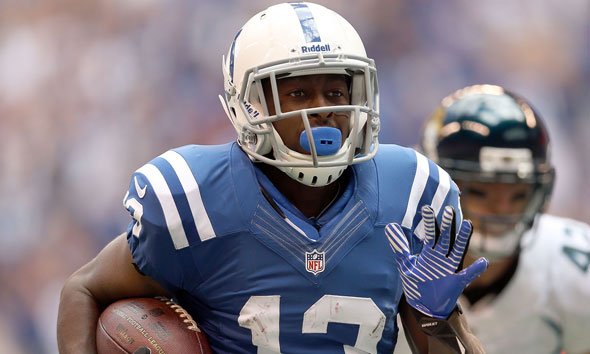 Courtesy of The Score: Hilton is among the rising stars at wide receiver.

One of the toughest positions in the league to evaluate this year, receivers are becoming increasingly talented (or the top is getting wider, depending on your view). Consider the landscape not too long ago—2006. No receiver had more than 1500 receiving yards, and only 19 were above 1000 by the end of the year. This year, the NFL is on pace to have four receivers break 1500 yards and for one more to get within eight of that mark. The NFL should have 26 total receivers hit the 1000 yard mark as well.

While quarterbacks are doing a better job of distributing the ball than before (the percentage share of an individual receiver’s yards to the team’s total passing yards has dropped), receivers in general are boosting their numbers and creating a flatter talent pool to evaluate from. At this point, there are ten 1000 yard receivers and they all deserve some consideration: Antonio Brown, T.Y. Hilton, Demaryius Thomas, Emmanuel Sanders, Golden Tate, Julio Jones, Jordy Nelson, Jeremy Maclin, DeAndre Hopkins and Dez Bryant. Jones and Nelson still have a game to play as of this piece, and so does Randall Cobb (922 yards).

With 22 players, one must be aggressive in parsing the list. First, folks that hurt the team through an excessive drop rate need to be removed—they take opportunities away from other receivers. Unless a receiver makes up for it by being special in other ways, a high drop rate can kill drives—and those above the receiver average (per Pro Football Focus premium subscription) of just over nine percent of catchable passes deserve special scrutiny. In this case, Kelvin Benjamin, Julian Edelman and Anquan Boldin probably do not fit the mold.

In the same vein, those who consistently consume targets without getting as many yards as the average receiver should probably be scrutinized. It’s a good thing to get open and it’s a good thing to develop chemistry with a quarterback, but if it comes at the expense of a better shot somewhere else, not only does it artificially boost a receiver’s value, it hurts the offense.

Further, receivers who cause interceptions on a consistent basis by poorly attacking contested balls, running the wrong routes. Of the four (technically five) interceptions the Texans have thrown in DeAndre Hopkins’ direction, for example, three could have been avoided by better attacking the ball (twice failing to high-point). The other one was hit as Fitzpatrick was throwing (and the technicality was too, but it’s an open play where we don’t know who the actual intended receiver was). 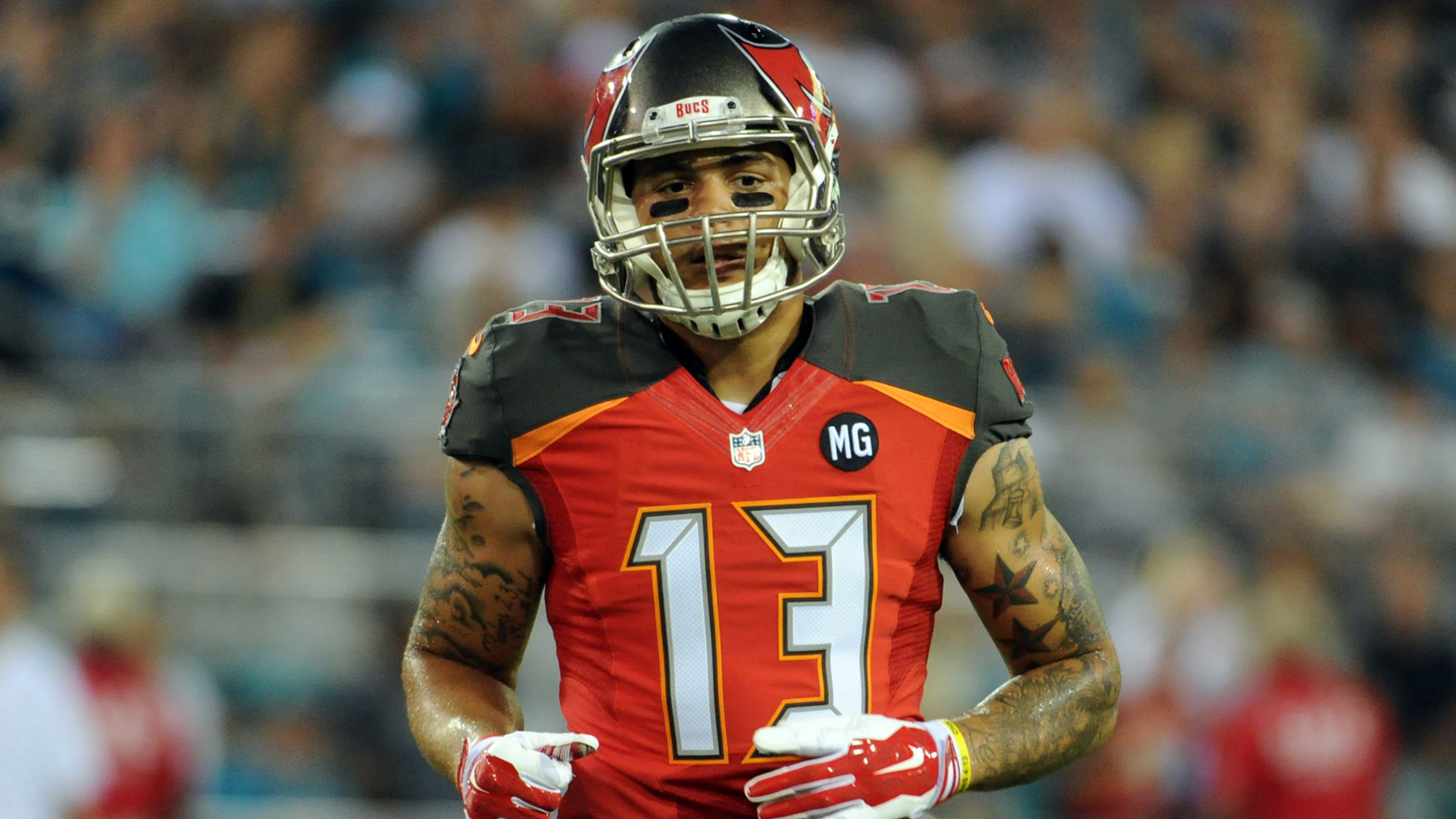 The interception stat is something one needs to be careful with, however. Mike Evans was likely could not have done much in four of the five interceptions thrown his way.

Looking at it from an efficiency perspective, we have to eliminate Vincent Jackson, Steve Smith, Alshon Jeffery, Steve Smith, Mike Evans, Odell Beckham, and DeAndre Hopkins. Of the 13 receivers left, one has grabbed an unusual amount of yards at moments that didn’t affect the outcome of the game (usually garbage time, but often will mean short of the sticks on third down and so on)—Julio Jones, with over 200 yards in the fourth quarter of games that had already been decided. Most years, this could be a deciding factor between allowing a receiver on the bubble in, but Jones has been working to make up lost ground.

Jones’ saving grace come in the last two games he’s played. Leaping to the top of the total receiving yardage bin as a result of two games for 448 receiving yards, a heroic if losing performance should cement Jones into the Pro Bowl. Even if Jones could (and should) be knocked for receiving much of his yardage in “garbage time,” he may deserve a spot not because of production, but pure talent—at the moment, he’s playing as the top receiver in football.

From there, you can further approach the problem of reducing the final board to eight: by creating locks. A.J. Green, despite only playing in ten games, hasn’t just been massively efficient when thrown to, but leads all receivers (by a wide margin) in yards per passing route run. He’s done a very good job to help pull together reasonable performances from Andy Dalton and is a threat to catch the ball almost any time he’s on the field. Antonio Brown may have the best receiving performance overall among the receivers left, and people sleep on the fact that his reception consistency is the best game-to-game asset an offense can have.

Virtually no offense in the league can walk into a game with five first downs in hand, but Brown has been doing it for the past two years. Only he and Jones have had at least 50 yards receiving in every game this year so far, and Browns’ contributions have been arguably more valuable because of his ability to create first downs (leading the league with 72, three ahead of Jones’ 69). 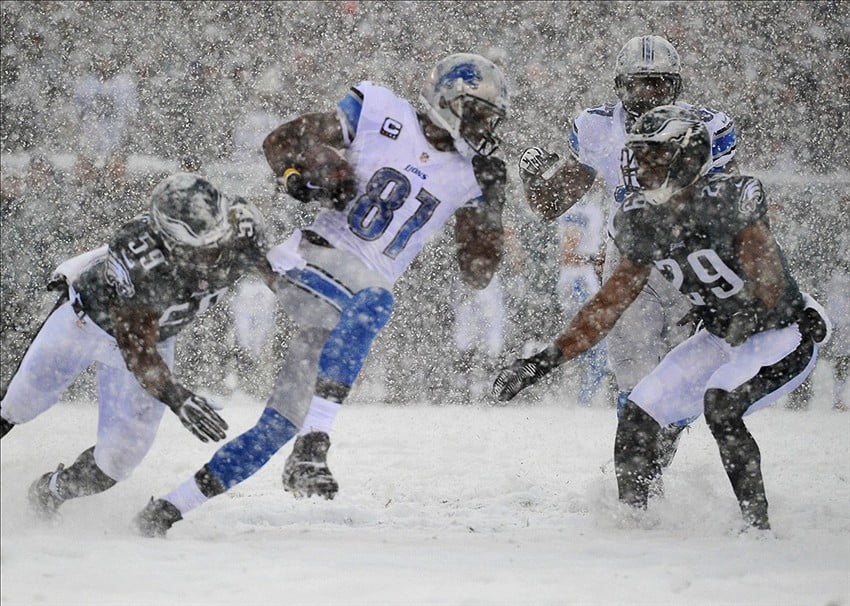 Courtesy of Fansided: Remember when Calvin Johnson was the unquestioned best receiver in the NFL?

Between Dez Bryant, Calvin Johnson, Randall Cobb, T.Y. Hilton, Jordy Nelson, Emmanuel Sanders, DeSean Jackson, Golden Tate, Jeremy Maclin and Demaryius Thomas, it seems intuitive that Bryant, Johnson, Nelson and Thomas deserve a spot but that may not be the case. Of those four, Johnson has had the most difficult time converting snaps into yards. Even after accounting for his missing time (having played only ten games, like A.J. Green), neither his yards per game (88.2) or his yards per route run (2.49) match the other four.

Still, Johnson on film is better than all four of those very talented receivers, combining dominant physical capability with creative, intelligent and clever route-running. It would be difficult to exclude a receiver who has shown more talent on the field than the other four (very talented) receivers because of production that has been held back by an increasingly erratic Matt Stafford and an overwhelmed offensive coordinator. The Pro Bowl is always a wrestling match between these kinds of traits, and his statistics this time are not clearly better than some of the other candidates, even outside of these four.

Demaryius Thomas may deserve demerits for being the most one-note receiver of the four. While Johnson, Bryant and Nelson have been threats at all three levels of the field, running every route on the tree, Thomas has run a shocking number of routes close to the line of scrimmage on screens and crossers.

His average depth of target (9.9) is close to other receivers known to thrive in the short game, like Percy Harvin (10.3), Eddie Royal (10.0), Randall Cobb (9.6) and Andrew Hawkins (9.0). On the other hand, Johnson (16.4), Bryant (13.3) and Nelson (12.1) are all above league average in their average target depths because they play a wider diversity of routes. Thomas also has the lowest depth-adjusted catch rate of the four.

Dez Bryant is just an inefficient receiver, in a different and perhaps slightly more damaging way than Calvin Johnson is. The yards per attempt on passes headed his way is lower than the other four by a wide margin, but he receives such a high target total when he’s on the field that his yards per route run still remains relatively high. One can be talked down from the high interception rate thrown in his direction, too. Unlike in previous years, it doesn’t seem as if miscommunications from his end or failures to attack the ball are on him, and he makes up for it with touchdowns.

Courtesy of USA Today: Nelson’s numbers speak volumes, but he also has Aaron Rodgers tossing him the rock.

Jordy Nelson is really the only one of the four that remains blemish-free. He has a great mix of on-field production and subjective receiving talent, and provides a threat at every level of the defense. His depth-adjusted catch-rate is only slightly above average, but because his target rate is high and his ability to create yards after the catch creates enough additional value that that worry would be marginal at best. Nelson has an underrated catch radius, and can catch the ball with his back to the line of scrimmage, high-point it or catch low passes in stride. It gives his quarterback ample leeway, even if Aaron Rodgers isn’t the kind of quarterback who needs it.

Putting those four aside, are there at least two other receivers who can displace them? Who among Randall Cobb, Emmanuel Sanders, T.Y. Hilton, DeSean Jackson, Golden Tate and Jeremy Maclin deserves to make it in above any of those players? Of the six players listed, only two stand out as consistently outperforming their competition in each of the following categories: win probability added, expected points added, success rate on targets, drop rate, yards per route run, adjusted yards per target, total receptions and total yards—Emmanuel Sanders and T.Y. Hilton.

It’s a matter of preference, however. Golden Tate contributed quite a bit to the Lions’ offense with Calvin Johnson out, even if he was massively inconsistent at times, while no one expected Randall Cobb to grab ten touchdowns. DeSean Jackson has reemerged as a high-level threat and is the only one of the players on the list with both an objectively bad quarterback and offensive system. Jeremy Maclin has come up big in games for a team that sits atop their division with a struggling running back.

At the end of the day I break the ties as following: Cobb has a higher drop rate than the rest, while Tate’s yards often come with problems like failing to convert the first down or getting adequate yards. DeSean Jackson is excellent in some categories, like adjusted yards per target, while poor in others, like total receptions and his drop rate (not to mention his average success rate). Jeremy Maclin, like Golden Tate, has an issue maintaining a consistent success rate for his offense.

T.Y. Hilton gets the nod for the final spot over Emmanuel Sanders, not just because of the role he has to play to carry the offense, but because Hilton has a number of marginal advantages, like in generating good down-and-distances for his offense, maintaining a better touchdown rate and simply grabbing more yards. His marginal disadvantages, like a small difference in drop rate, are offset by other things Hilton does—like his clearly superior blocking and higher degree of difficulty in his catches (which are much more likely to be contested and further downfield).