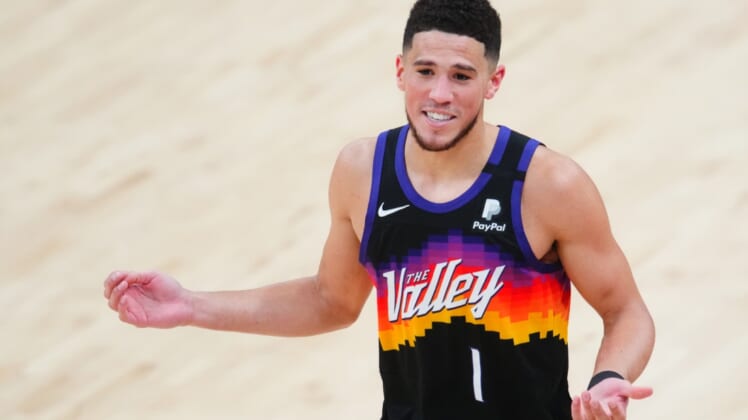 Looking completely comfortable in the moment, the Phoenix Suns can move even closer to their first NBA Finals in 28 years when they host the Los Angeles Clippers on Tuesday in Game 2 of the Western Conference finals.

The Suns got the jump on the Clippers in Game 1 for a 120-114 victory backed by Devin Booker’s first career triple-double, which only gave more proof that Phoenix is not fazed by the spotlight.

Booker had 40 points, 13 rebounds and 11 assists in yet more evidence of his superstar status.

The Suns won despite playing without veteran point guard Chris Paul, who is in COVID-19 protocols after reportedly testing positive for the virus. Paul joined the team via video to celebrate the victory.

“We want to protect home court, so that was big for us to come out and secure that one,” Booker said. “I don’t know if I showed that much emotion through the playoffs that much, but not having Chris out there and being a high-intense game, we wanted that one bad.

“So it’s obviously only one. We know what they’re capable of and what they have done, came back, down 0-2 from their past two series, so we got to stay locked in.” 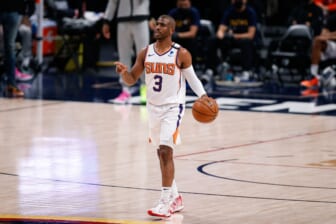 The Clippers also were short-handed without superstar Kawhi Leonard, who is out with a knee sprain. But he was also out last week when the Clippers won consecutive games to finish off a conference-semifinal victory against the top-seeded Utah Jazz.

Paul’s status for Game 2 remains unknown, while the Clippers have not given a timetable for Leonard’s return.

With the Clippers playing again with the small-ball lineup that befuddled the Jazz, the Suns had answers for Los Angeles’ adjusted aggressive approach on offense.

The game was tied at 93 when the fourth quarter started, with the Suns taking control by going on an immediate 12-2 run. The Clippers pushed back late, getting to within 116-114 with 22 seconds remaining before the Suns finished off the victory.

Paul George stepped up for Los Angeles with 34 points, while Reggie Jackson had 24, but Terance Mann had nine points after his breakthrough 39-point game to finish off the Jazz.

“As much as we wanted this one, I think this was a good feel-out game to see adjustments,” George said. “We’ve been great adjusting, and you know, we’ve been great at playing better as the series goes on.”

The Clippers led by as many as six points in the third quarter at 84-78 and looked poised to continue their success without Leonard until the Suns found another gear at home.

Clippers head coach Tyronn Lue has been adept at making in-series and in-game adjustments and will have to come up with new answers moving forward. One priority will be to slow Suns big man Deandre Ayton, who had 20 points and nine rebounds.

“We played hard and competed,” Lue said. “(We) had some good shots down the stretch that we didn’t make. So give them credit. They made the shots and we didn’t. But I loved our fight, loved what I saw and just seeing how they played Game 1 and what they were trying to do and how they were trying to attack.”