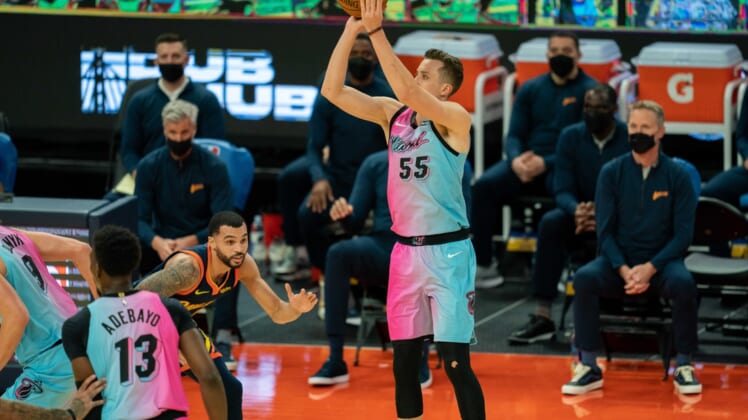 The Miami Heat and the host New Orleans Pelicans both will be looking for a bounce-back win when they meet Thursday night.

The Heat took a 94-80 defeat to the visiting Atlanta Hawks on Tuesday, ending a six-game winning streak. The surge had allowed Miami to join a logjam of teams battling for spots in the Eastern Conference playoffs.

The Pelicans have a lot more work to do, but they are within striking distance of the final playoff spots in the Western Conference. They recorded a signature win against the NBA-leading Utah Jazz on Monday before slipping in a 128-124 home loss to the Chicago Bulls on Wednesday.

The Heat had a chance to get over .500 for the first time this season Tuesday, but they couldn’t find any offensive rhythm against Atlanta, which was playing its first game since coach Lloyd Pierce was fired. The dismissal came one day after the Heat beat the visiting Hawks, and Pierce was replaced by interim coach Nate McMillan.

Miami shot just 37.3 percent from the floor on Tuesday and made 9 of 33 on 3-point attempts while producing its lowest point total of the season.

“We had been trending much better offensively,” Heat coach Erik Spoelstra said. “It just was a flat offensive game. It was not a fluid game for us on that side of the floor.”

Miami’s Duncan Robinson, who tied for team-high honors with 14 points, “Defenses are going to be disruptive and do different things to try to guard us, but there are always counters and ways to be effective. We just have to find solutions.”

The Heat were outrebounded 47-26, their largest rebounding deficit of the season.

Miami star Jimmy Butler missed the past two games because of right knee inflammation. It was unclear if he would be available to face New Orleans.

Right ankle stiffness sidelined Butler for the second half on Christmas Day in Miami, but the Heat beat the Pelicans 111-98. Robinson made seven 3-pointers and scored 23 points.

On Wednesday, New Orleans trailed Chicago by as many as 19 points before making a fourth-quarter charge, but the Pelicans could never pull even.

Zion Williamson, a second-year player headed to his first All-Star Game, led the Pelicans with 28 points, but he made just half of his 16 free throws. After the game, he returned to the court to work on his shooting for about 40 minutes.

“I feel like I let the team down,” said Williamson, who made 10 of 17 field-goal attempts. “If I want to be a great player, I’ve got to put stuff like this on my shoulders.”

JJ Redick scored 22 points off the bench for the Pelicans, who have been erratic all season, mostly because of poor defense.

“If we could just be an average defense, we’d probably have a winning record,” Redick said, “but we’re at an extreme on offense and defense. We’ve got to be better (on defense) in order to get better results.”